Advances in technique and imaging allow for DBS (deep brain stimulation) to be done either with the patient awake or fully anesthetized. 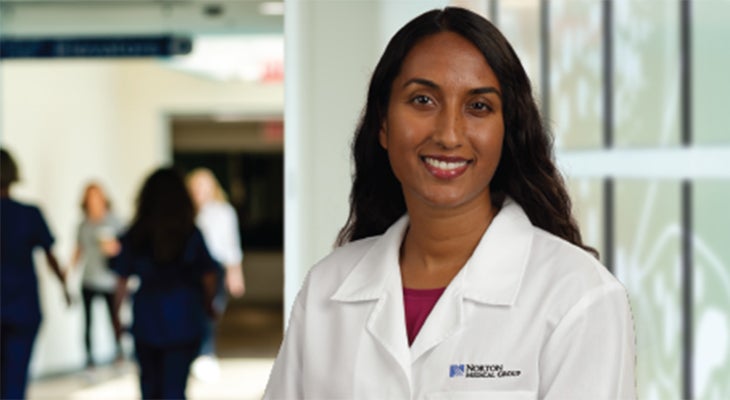 As a neurosurgeon, Abigail Rao, M.D., has performed many lifesaving surgeries to remove brain tumors and blood clots. As one of Norton Neuroscience Institute’s newest neurosurgeons, her practice now focuses on brain surgeries meant to be life-changing, rather than lifesaving.

For patients, the improvements to quality of life are nothing short of profound.

“For many patients, the tremor is so bad they can’t cut their food or drink without spilling. So they become dependent on others, they can’t work or write legibly, they don’t go out because they’re embarrassed. It’s very debilitating,” she said. “With DBS, we can often see the condition reduced 50 to 80 percent or even more.”

Dr. Rao specializes in functional neurosurgery, which works to improve the lives of patients with these disorders. Often, younger patients are able to manage the condition with medication, but as they age the condition becomes severely disabling.

Dr. Rao moved to Louisville at an exciting time for her field and for Norton Healthcare, which hired her to take on a leadership role in developing DBS and the functional neurosurgery specialty as demand and broader usage increases. She works at Norton Brownsboro Hospital.

Physicians have been using electrical current targeted with pinpoint accuracy inside the brain for several decades, mostly to treat movement disorders. It now has new uses and is being tested for a broader array of conditions such as epilepsy, depression, obsessive-compulsive disorder, pain treatment and memory problems that can come with Alzheimer’s disease.

Researchers predict an aging population will lead to a large increase in the number of people with Alzheimer’s and Parkinson’s diseases. A 2014 study found about 100,000 people worldwide have been implanted with DBS systems, most of whom have Parkinson’s disease or essential tremor.

Dr. Rao grew up on a farm outside of Madison, Wisconsin, and was inspired to practice medicine by her father, who is a busy plastic surgeon. She got interested in neurosurgery as an undergraduate student working in a neuroscience lab and earned her medical degree from Warren Alpert Medical School of Brown University in Providence, Rhode Island. She trained in neurosurgery at Oregon Health & Science University in Portland.

That’s where she met her husband, a neuroscience intensive care unit (ICU) nurse. The two learned they had grown up about an hour apart in Wisconsin and were later married in an Oregon vineyard.

After completing her residency in neurosurgery, Dr. Rao completed a fellowship in functional neurosurgery at University of California – Los Angeles and the VA West Los Angeles Medical Center. There, she obtained specialized training in DBS, epilepsy, surgical management of pain, and peripheral nerve disorders.

During that time, Dr. Rao and her husband enjoyed living near the beach in Santa Monica, and over the years have enjoyed traveling to places such as Thailand, French Polynesia and Botswana for a safari. Dr. Rao said she considered a number of offers but decided that Norton Healthcare had all the elements needed to pursue her advanced work.

She said each DBS operation takes several hours. She implants tiny electrodes in the brain that draw their power from a battery placed under the skin near the shoulder.

Dr. Rao uses a newer technique where the patient, instead of being awake, is fully anesthetized. She said it has many benefits, including being more comfortable for the patients, who often are understandably uncomfortable with the idea of being awake during brain surgery.

“When the field first started, people thought, ‘How are we going to know we are placing the electrodes exactly where we want them to be?’ So they did the surgery with patients awake,” she said. “They’d put the millimeter-sized electrode in, have patients perform movements and then they could move the electrode or change the stimulation (for the best therapeutic effect) if they had unintended results, such as numbness in an arm.”

But advancements in technology, including intraoperative magnetic resonance imaging (MRI) and computed tomography (CT) scans that map the brain in three dimensions, have allowed for accurate targeting. It also allows for a much quicker procedure — two hours as opposed to most of the day — which means less likelihood that the target area will shift.

Deep brain stimulation is ‘not a cure, but it can be transformative’

Dr. Rao said she realizes families often have misgivings about brain surgeries, including elective surgeries. She emphasizes compassionate care that accompanies her advanced skills, walking them through the process, empowering them with education and stressing the full benefits of DBS might take weeks or months to show up.

“I tell my patients it’s not a cure, but it can be transformative for people who say, ‘I can go out with my friends, I can brush my teeth, and I can not have a seizure at work. Life is a lot better,” she said.

The National Association of Epilepsy Centers has recognized Norton Neuroscience Institute as a Level 4 Epilepsy Center. The designation means you’ll receive the highest level of medical and surgical evaluation and treatment for complex epilepsy.

“All neurosurgeons worry a lot, and there are instances every few weeks or months where you might go home but you’re constantly concerned about something. You’ll go back to check on them. Or you’re just chart-stalking them in the computer,” she said. “You’re never really gone from work.”

From disoriented to chatting over a sandwich within days

The challenges and rewards of her work were evident on one of the first surgeries that she was in charge of in Los Angeles. There, Dr. Rao was called for a woman in her 80s who had arrived at the UCLA emergency room with a dangerous blood clot in her brain.

The older woman could barely talk and didn’t know what was happening, Dr. Rao recalled.

“Her family was super sweet. I talked to her daughter and grandkids, explaining things,” she said. “If we don’t do something about this, she will pass from this problem.”

The family decided to proceed with the surgery, and Dr. Rao said she would never forget the results.

“She recovered amazingly. It was so awesome to see,” Dr. Rao said. “Two days later, she’s eating a club sandwich in the ICU, watching TV, she’s chatting and we’re having a whole conversation. She wanted to talk and talk. The family was crying. It was something I’ll always remember.”