Want the secret to quitting smoking?

Want the secret to quitting smoking?

The Fouches turned their smoking class into date night 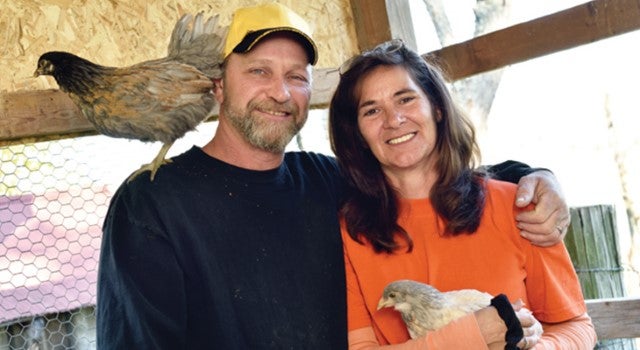 For many couples married more than 20 years, a fun night out together might mean dinner and a movie. For eight weeks recently, a fun night out for Tim and Doreen Fouch meant driving together from their home in Vine Grove, Kentucky, to a stop-smoking class in Louisville.

Though it hardly sounds like the typical good time, the Fouches enjoyed attending the Freedom From Smoking program provided by Norton Cancer Institute. They credit the connections they made with their classmates and leader, JoAnna Couch, R.N., OCN, for making the class a positive experience.

“We laughed and joked a lot, even about the struggles of quitting,” Doreen said, adding, “Plus, the relaxation tapes were really enjoyable.”

The couple praises Couch for keeping the class interesting and fun.

Couch has taught other stop-smoking classes but is excited to teach the American Lung Association’s Freedom From Smoking program. She sees many advantages in giving participants four weeks to plan how they will quit.

“If you don’t plan, you don’t do well changing routines and behaviors,” Couch said. “I tell them, ‘If you’re tempted to smoke, call me instead and let’s talk through it.’”

As a breast cancer survivor, Doreen had tried to quit several times since her surgery in 2011, but had never found success beyond three months. When she learned a class was available that she and Tim could attend together, she said, “Sign us up!”

She called Tim and said, “I’ve got a surprise. I signed us up for a smoking class at night so we can both go.”

Tim also had tried to quit several times but was willing to give it another try. His motivation grew stronger at class after seeing a list of chemicals in cigarettes — nicotine, tar, arsenic, ammonia, even the insecticide DDT.

Everything tastes so much better

The Fouches appreciate the encouragement they’ve gotten from friends and family. Doreen’s co-workers at the FiveStar food mart near her home keep her motivated. Tim gets thumbs-up — plus friendly ribbing — from his buddies at the Elizabethtown warehouse where he works. The couple’s three grown sons are happy for their parents, who want to set a good example for their four grandchildren.

Tim and Doreen estimate they’re saving about $70 a week by not smoking, though they laugh about spending more now on food.

“We’re eating out a lot more, and everything tastes so much better,” Tim said. They even used some of their savings on a project near and dear to Doreen. “I love chickens and fresh eggs. I’ve always wanted a chicken coop, so Tim built me one,” she said.

Norton Healthcare’s comprehensive tobacco cessation program is available to any adult who is ready to quit using tobacco.

Quitting smoking together has worked for the couple. They agree nicotine replacement patches provided through the class were helpful but caution that even with help, quitting is hard.

“You just have to stick with it,” said Tim, who finds a supply of Hubba Bubba gum helps keep his cravings in check.

Doreen shares a tip from class about what to do with hands that feel empty after years of holding a cigarette.

“We got a small plastic tube the size of a cigarette to hold instead,” she said.

Tim and Doreen are happy they could support each other in quitting, yet they sometimes miss their weekly group sessions. As the class neared an end, several people asked, “Can’t we keep coming a little bit longer?” There’s even talk of planning a “class reunion.”