Approved by the FDA in 2018, two apps in recent versions of the watch check for irregular heartbeats and atrial fibrillation. 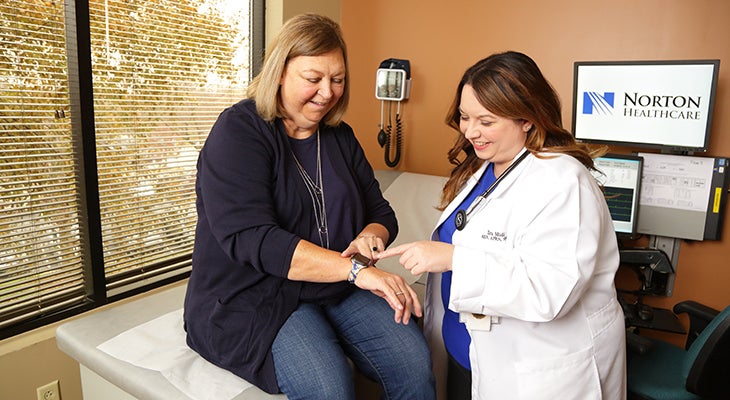 None of the above.

“Your heart has shown signs of an irregular rhythm suggestive of atrial fibrillation.” The message from her watch went on to suggest she see a doctor.

But it’s just a gadget, right?

“I honestly didn’t think much of it,” Rosemary said.

A few weeks later while chatting with a physical therapist, she mentioned the A-fib message, including the part about seeing a physician. Rosemary admitted she hadn’t done anything about it the warning and the therapist urged her to get it checked out.

At her primary care provider’s office, her doctor was intrigued by the watch’s message. She listened to Rosemary’s heart, heard an abnormal rhythm and performed two electrocardiograms (EKGs) to collect more precise readings of Rosemary’s heartbeat.

Some Medication and a Better Night’s Sleep

Both EKGs showed A-fib. Rosemary’s doctor put her on medication and referred her to the Norton Heart & Vascular Institute Atrial Fibrillation Clinic, a part of the Heart Rhythm Center.

Tara Mudd, APRN, met with Rosemary on her first visit.

Rosemary described feeling tired and having trouble sleeping. She also mentioned a decrease in energy, which limited her ability to complete her everyday activities.

“Many of the symptoms Rosemary described are very common among patients with A-fib,” Tara said.

“In Rosemary’s case, she does have diabetes and hypertension, both of which are well managed by her primary care provider,” Tara said. Follow-up tests were ordered, including a sleep study that showed Rosemary had sleep apnea. An echocardiogram showed there were no structural abnormalities causing the A-fib.

By addressing the sleep apnea and taking medication for the A-fib, Rosemary’s heart has resumed to a normal rhythm.

Rosemary is feeling much better, and her fatigue has improved significantly. She is continuing her medication therapy and is learning to sleep with a CPAP machine that helps keep her breathing during the night.

FDA Approves the Watch, but See a Provider for a Diagnosis

“Since the Food and Drug Administration recently approved the Apple Watch EKG technology, we anticipate instances similar to Rosemary’s happening more often,” Tara said. “The technology proved key in the prompt diagnosis, evaluation and treatment of her A-fib.”

Starting with the Series 4 Apple watch, like Rosemary’s, the device comes with two FDA-approved apps. One creates a slimmed-down electrocardiogram that can detect A-fib and regular heart rhythm. The other app analyzes the pulse rate to identify irregular heart rhythms that may suggest A-fib and send a notification.

The software is not intended for users under age 22 and is considered merely information and not the equivalent of a formal EKG or a substitute for seeing a health care provider if your health changes.

If you’ve already been diagnosed with A-fib, you shouldn’t rely on the watch’s EKG.