Breast cancer affects every woman differently; for this one, her outlook got her through 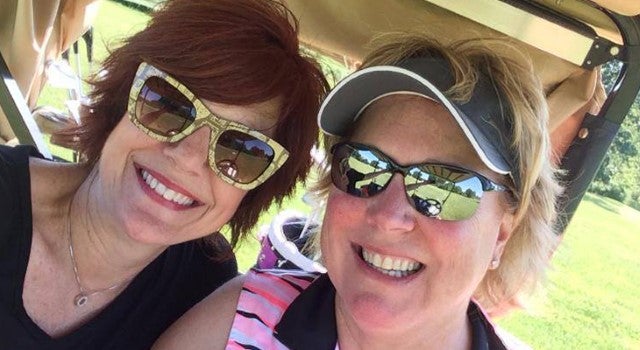 On Sept. 15, Give Local Louisville day, we shared 24 Hours of Courage on Facebook — a day highlighting the stories of courageous mothers, sons, husbands and friends who have fought or are currently fighting one of the most tragic diseases of our time — cancer.

We’re now turning these stories of courage into tales of triumph that need to be heard.

We are honored to share Mary Lou Fitzer’s story again with you, in her own words.

I was diagnosed with breast cancer in 2012. I went for my annual mammogram and they saw something, so they sent me to a diagnostic clinic. I had one biopsy with a male doctor and the second with a female and she is the one that suggested that I have a bilateral mastectomy.

I was by myself. I was by myself sitting in a stranger’s office basically. So when I was told the first time by the male doctor, I guess I wasn’t overly surprised — breast cancer runs in my family. Getting breast cancer crossed my mind often. I really don’t remember crying. I don’t even remember telling anyone. It was just like, “Oh.” But it was a still a shock. You hear that word cancer and you can’t believe it’s happening to you.

Telling my children was worse than what I thought it would be. We told them and assured them that I was fine. But because of their youth, they didn’t know what questions to ask, so they ended up getting emotional with other people. They were sharing their emotions at school or getting upset while talking to other people. They were at a more tender age then, but now that they are a little bit older they see that I am fine. And maybe they needed to talk to other people anyway. Sometimes that is the best.

I never thought of doom and gloom. It was just, “OK, I’m going to get to be on vacation (because it wasn’t medical leave — it was a vacation) and I’m going to get new boobs.” Being off for five weeks of work — that was nice. I went to the pool; I went shopping with my friends. I treated myself to that time. That time was for me.

Having breast cancer just kind of happened and then it was a void. There isn’t really follow up for people like me. Because I didn’t require a lot of care, I didn’t receive a lot of extra care. I go once a year to meet with my surgeon and my plastic surgeon and I am religious about that. As far as being cancer-free, I am. The chances of me getting breast cancer again are slim to none.

My family was amazing. We’ve had a lot of cancer in our family and everyone really rallies around when needed. And my work colleagues — my gosh! Before I left on medical leave, the girls in the office held a party for me. All of us went to a restaurant and they had a cake that said “Boob Voyage!” and gave me a massive gift card for Victoria’s Secret. During my leave, I had food coming out my ears from co-workers and friends. It was amazing. It really does take a village to live this life. They say it takes a village to raise a child, but it takes a village to just be. You need people.

My treatment required three surgeries and it always struck me when people would tell me I was handling it so well. People would say to me, “You have such a great attitude about it.” What else was I supposed to do? I just couldn’t imagine doing it any other way. From the beginning I looked at it as a good thing. I was relieved that if I was going to get it due to my family history, I wasn’t going to have to think about it anymore.

At one point my mother and I were laying in her bed and we were like, “Look at us. Both of us with our fake boobs, having gone through breast cancer.” And we just laughed.

Norton Healthcare Foundation is taking part in the Revlon Love Is On Million Dollar Challenge. Help us kiss cancer goodbye by raising funds to support the Norton Cancer Institute Breast Health Program. Every gift goes toward prevention, research and support programs in our community. Make a donation at LetsKissAndTell.com, then share a kiss with someone you love and tell the world using #KissAndTell. Ask the ones you love to join you in kissing breast cancer goodbye.