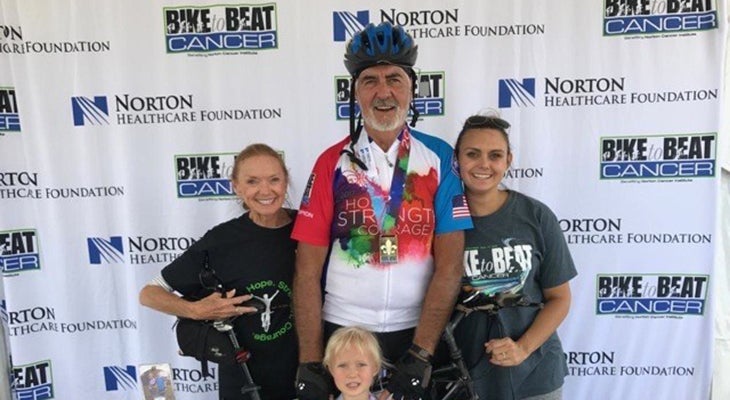 Mike is a four-time cancer survivor. While Mike is always willing to share his personal story, it is the cancer journeys of others that Mike wants to talk about more. Each year, Mike picks a loved one, like his beloved sister, or friend who is battling or who has lost their battle with cancer, and rides in their honor.

Mike also keeps a list of every cancer survivor he knows or those who have lost their battle throughout the year, and he writes each of their names on his Bike to Beat Cancer “I Ride for” sign.

“The list of people I ride for is long. I look at that long list, and it is just devastating,” Mike said.

Register or donate or learn more at BiketoBeatCancer.org.

Encouragement is one of the things Mike does best for Bike to Beat Cancer. Mike is at every training ride to help mentor new riders, showing them how to work the mechanics of their bike and pedaling alongside them as they work to get up their first hill.

He regularly completes a 40-mile loop from his house through the Parklands of Floyds Fork. While training, Mike will talk with other riders and recruit them to participate in Bike to Beat Cancer.

“I encourage them to ride because it such as rewarding experience. It is a great way to help others, give back and a great way to get in shape,” Mike said.

An active rider and a top fundraiser

Mike also competes to be in the top 10 Bike to Beat Cancer fundraisers every year. This year, Mike’s goal is to raise $7,000 to support the fight against cancer at the Norton Cancer Institute.

Mike encourages riders raising money for the cause to “just ask.”

“No one likes to ask for money, but just ask because so many people can relate. Cancer touches so many and people are eager to help,” Mike said.

He also uses his Bike to Beat Cancer personal fundraising page and social media pages to update his donors and supporters on his training and progress.

“The Bike to Beat Cancer is a big deal to me,” Mike said. “I love being a part of the planning and seeing everyone pumped up about the ride.”

With his humble smile and big heart, Mike reflects back on his favorite moments of each ride, which are “too numerous to name.” Never one to boast about all he has overcome, all that he has accomplished or the tens of thousands of dollars he has raised for the Norton Cancer Institute by “just asking,” Mike talks about the people he rides for each year.

“They are just the wind in my back,” he said. “They keep me going mile after mile.”