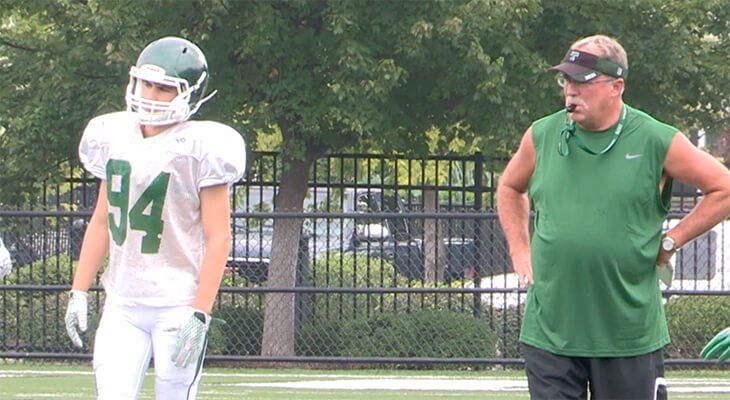 Trinity High School Head Football Coach Bob Beatty needed a hip replacement. He couldn’t really celebrate wins anymore because he needed to sit down right away after a game. He wasn’t enjoying what he was doing as much.

For Beatty, the recovery from major joint replacement was less difficult than many may assume.

He had the surgery in the morning, was walking the halls and steps in the afternoon, and was home later that day.

By operating through the front of the hip — rather than the traditional method through the back of the hip — surgeons can separate muscles rather than cut them. That means a less painful recovery for most patients and a potentially quicker return to getting up and around without a walker or cane. Also, certain complications, like hip dislocation, are dramatically reduced.

“Anterior approach [through the front of the hip] offers faster recovery in the early stages after surgery when you’re looking at six to 12 weeks. But there’s a significant difference in the short-term recovery and the speed of walking without a walker, walking without a cane and pain,” said Beatty’s orthopedic surgeon, Jonathan Yerasimides, M.D.

“I went in for surgery at 8 a.m. and was in my recliner at home by 5:01 p.m. that evening,” Beatty said. “The bone-on-bone pain I’d been feeling for years was instantly gone. I was up walking and even doing some stairs that afternoon.”

Weeks after his late-January 2016 surgery he was back at work.

By May, Beatty was able to do anything he wanted.

Candidates for same-day hip replacement surgery need to be under age 65, otherwise healthy and not obese, according to Dr. Yerasimides.

If the Shamrocks win their 13th state championship under Beatty’s leadership Sunday night, look for the coach running and jumping in celebration. He couldn’t do that a few years ago.