Three months later, Ben completed his treatment and he was ready for the Norton Cancer Institute Bike to Beat Cancer ride in September. 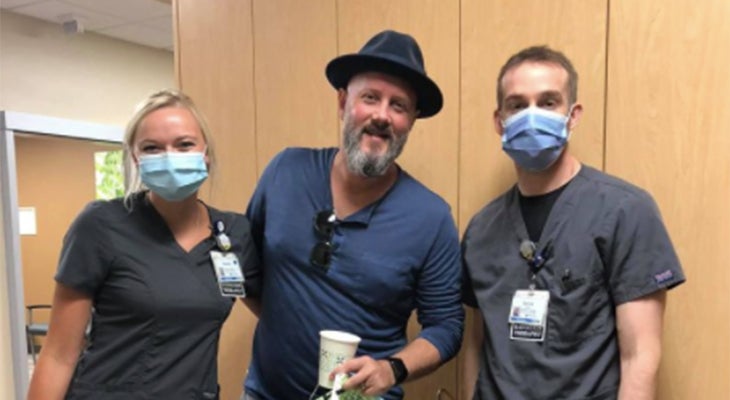 A seizure in late May, followed by another in early June led Ben Smith to the emergency department at Norton Women’s & Children’s Hospital.

Visitor restrictions were in place due to the coronavirus pandemic, but he found comfort in knowing his wife, a nurse at the hospital, was working nearby.

A computed tomography (CT) scan revealed a golf ball-sized mass on his brain. From there, Ben was transported to Norton Brownsboro Hospital for assessment by the Brain Tumor Center team.

Surgeons would be able to operate to remove the tumor from Ben’s right frontal lobe, but the surgery would put him at risk of losing mobility on the left side of his body. Personality changes also were a possibility.

After about a four-hour surgery, Ben was relieved.

Norton Cancer Institute is revolutionizing care, so that one day cancer will be a thing of the past. Learn more at NortonHealthcare.com/DefeatCancer.

“Surgery was really successful,” said Ben. “When I woke up, I could move all my limbs and was, mentally, very strong.”

Surgeons were able to remove most of the mass, but pathology confirmed the tumor was cancerous — astrocytoma.

“That’s one of the more common brain tumors,” said Kaylyn Sinicrope, M.D., Ben’s neuro-oncologist the Norton Brain Tumor Center, a collaboration of Norton Neuroscience Institute and Norton Cancer Institute. “It’s similar to but less aggressive than a glioblastoma, which is more commonly known.”

A plan of attack was in the making. The multidisciplinary Brain Tumor Center team is made up of physicians and others who bring their own expertise to every case and offer their viewpoints at a regular review of patients’ progress.

“They all had great bedside manner,” Ben said.

The team, consisting of a neuro-oncologist, behavioral oncologist, surgeon and many more specialists, decided 30 rounds of radiation, coupled with oral chemotherapy, would be the best approach.

In August, Ben completed his treatment, and he was ready for the Norton Cancer Institute Bike to Beat Cancer ride in September.

Cancer doesn’t stop for the pandemic. It didn’t stop for Ben. Yet, despite his diagnosis, his drive to help others didn’t waver. He mustered up the strength to ride 35 miles in honor of his brothers and sisters fighting cancer. His cycling team raised more than $10,000.

“Ben is such an inspiration,” Dr. Sinicrope said. “He’s someone I’m going to tell my other patients about to help inspire them.”