Vegetables and turmeric are the secret to this healthy soup 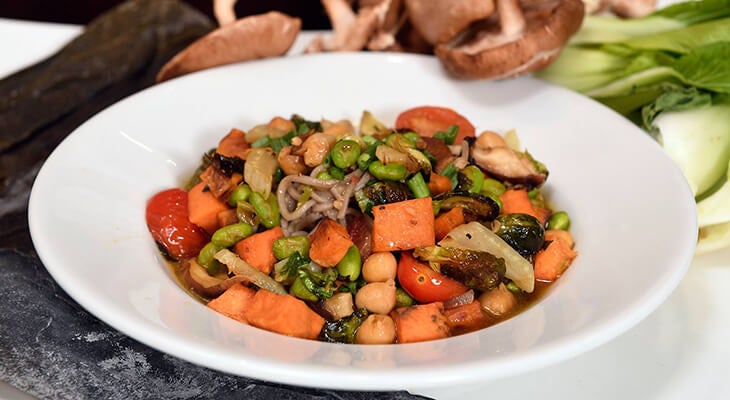 Looking for a soup with power-packed ingredients that offer flavor and cancer-fighting properties? This recipe might be the answer.

Make your own healthy broth to control the sodium level. If the number of ingredients or steps scares you, don’t let it. You can start with the broth and roasted vegetables one day (make a double or triple batch and freeze!) and then assemble with the rest of the bowl later.

The recipe, created by Norton Hospital Chef Clay Cundiff, will be entered in the Healthy Food in Health Care’s culinary contest. It will be served at Norton Cancer Institute – Brownsboro Bistro once construction is completed.

About ½ cup soba or buckwheat noodles

Blanch the bok choy by first preparing a bowl of ice water large enough to hold the 3 heads. Then bring a large pot of water to a boil and salt to your liking. Once boiling, add the bok choy and continue to boil to your desired tenderness. Check every 30 seconds. Remove from the boiling water and immediately place in a bowl of ice water.

Cook the noodles according to the package directions. In pot on medium-high heat, heat all ingredients in the broth. Serve warm.

Crumble the dried shiitakes and kombu onto a sheet pan sprayed with cooking spray. Top evenly with the miso-coated sliced vegetables. Roast the vegetables until browned, about 60 to 75 minutes, stirring halfway through.

Combine the vegetables, onion peels, 12 cups of water, peppercorns, parsley, ginger and garlic in a stockpot. Bring to a boil, then reduce heat to a simmer. Simmer until reduced by half, 60 to 75 minutes. Strain through a mesh strainer, pressing to extract as much liquid from the vegetables as possible. Season with salt to taste. The broth can be kept frozen for up to three months.

Salt and pepper to taste

Heat oven to 450 degrees F. Peel the sweet potatoes and cut into 1/2-inch cubes. Trim the stem end of the Brussels sprouts and cut in half through the stem end. Toss the vegetables with the olive oil to coat them,  and season with salt and pepper. Spread in a single layer on a baking sheet, and place in the oven for 25 minutes or until tender. The roasted vegetables can be chilled for use later.