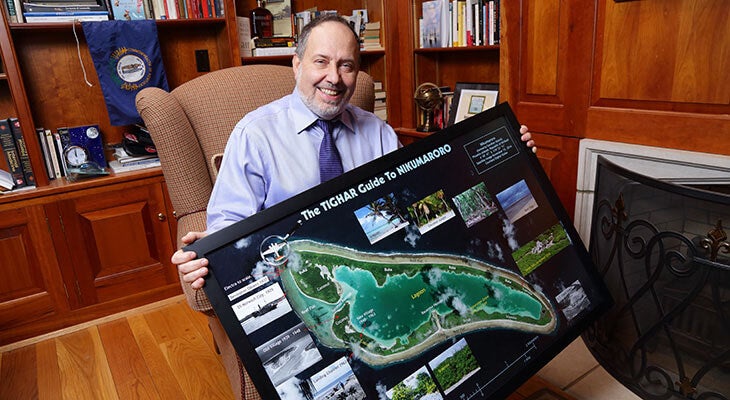 As a cancer specialist and neuro-oncologist at Norton Cancer Institute, Renato V. LaRocca, M.D., diagnoses and treats high-grade brain tumors and other solid tumors. Last summer, he applied the same evidence-based approaches he uses to help patients to try and answer one of history’s most vexing questions: What really happened to legendary aviator Amelia Earhart?

Driven by a love for history, aviation and the South Pacific, Dr. LaRocca participated in an expedition to Nikumaroro, an uninhabited island 1,500 miles north of Fiji. The trip marked the 80th anniversary of Earhart’s disappearance. It was led by The International Group for Historic Aircraft Recovery (TIGHAR) and sponsored partly by National Geographic.

The 4-mile-long, half-mile-wide island is surrounded by a coral reef. It’s densely vegetated and teeming with crabs, yet Dr. LaRocca found it beautiful.

“I know islands, and this one is truly special,” Dr. LaRocca said. He joked that expedition members voted him “the one most likely to stay.”

The team worked five days scouring the island for bone fragments and aircraft debris. Trained scuba divers checked the coral reef for wreckage, but were unable to find a large metal piece spotted during a former expedition.

Using logic, one day Dr. LaRocca found the previously discovered “Camp Zero,” where the famed aviators may have survived briefly. He looked from the shore to the point on the reef where the plane would have stopped and imagined a straight line to the nearest area of vegetation beyond the beach. There it was — an open area with a rusted oil drum, two piles of rock “seats”, and a stone fire pit. It is unproven, but possible, that Earhart and Noonan camped here.

Earhart’s mystery remains unsolved, but growing evidence supports TIGHAR’s theory. For example, numerous radio transmissions thought to have come from her aircraft were tracked for three days after her disappearance. In 1940, partial skeletal remains were found on the opposite end of the island.

Those remains were sent for testing and subsequently lost, however a modern forensic study of the finder’s notes concluded the bones were most likely a Euro-American female. As the search party worked the site where the lost bones were first found, the forensic dogs lay down several times to signal a “find.”

The group found no concrete answers, but collected material that is undergoing DNA analysis.

He said he would love to be part of solving this puzzle and is actively working with his TIGHAR colleagues to return to Nikumaroro in 2019.