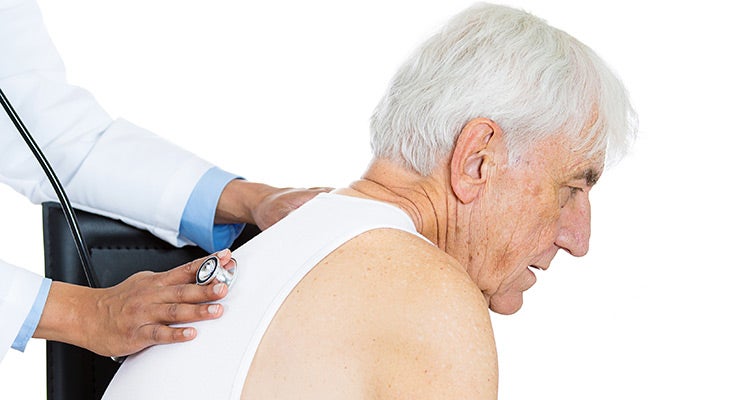 When you’re suffering from chronic obstructive pulmonary disease (COPD), your symptoms don’t just come and go. You may have given some thought to lung volume reduction surgery (LVRS) as a way to breathe easier.

A new, innovative approach — endobronchial lung volume reduction therapy — frees up the healthier part of your lungs to do their work without major surgery

For patients with severe COPD, an interventional pulmonologist can essentially shut down, rather than remove, the most diseased parts of the lung.

Doctors place one-way valves in the areas of the lungs that are hyper-inflated and nonfunctional. The valves prevent air from getting in, and the areas collapse.

We have more than two dozen physicians on staff working together to ensure the most comprehensive treatment available.

Once collapsed, the diseased and nonfunctioning parts of the lungs no longer crush and crowd out healthier lung tissue. The less-damaged portion of the lung then can expand and function better.

“This procedure was in clinical trials up until a little more than a year ago,” said Tanya A. Wiese, D.O., pulmonologist with Norton Pulmonary Specialists. “It’s a great alternative for COPD patients who were otherwise considering major surgery to reduce their lung volume.”

This procedure is performed with a bronchoscope — a flexible tube that can carry a tiny camera and other tools into the airways without an incision. After the procedure, you’ll stay in the hospital a few days for monitoring.

Endobronchial lung volume reduction therapy is a relatively new procedure. It is only performed by interventional pulmonologists.

Endobronchial lung volume reduction therapy is also a good treatment option for patients who have a compromised respiratory status and are deemed not fit for surgery. The procedure is only considered after conventional and less-invasive COPD therapies have been tried.