Cystic fibrosis, then another surprise in first pregnancy journey

Cystic fibrosis, then another surprise in first pregnancy journey

From not sure what cystic fibrosis is, to ‘your baby has CF’ 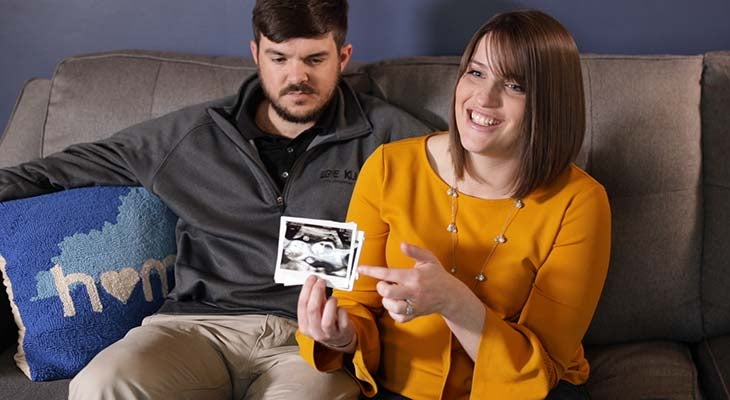 Our journey to parenthood started with joy, excitement, a bit of surprise and a whole bundle of nerves. Is anyone ever really ready to be a parent — to see those eight letters, “pregnant” — on a pregnancy test stick?

Here’s to a smooth pregnancy

But if special care is needed, the expertise of Norton Children’s is there for you and your baby.

I made my first appointment with Norton OB/GYN Associates, and it felt like time crept by. The four-week wait from my at-home pregnancy test to the first ultrasound was hard. The appointment went wonderfully, and my husband, Albert, and I received our first glimpse at a squirmy little bean and heard its heartbeat.

Curious to learn the baby’s sex

I have a few friends who were months ahead of me in pregnancy. They mentioned a genetic screening and blood test that could be taken after the 10-week mark to find out the baby’s sex. Eager to know and eager to plan, I opted for DNA testing that reveals information such as gender, genetic disorders, intellectual disability or other health problems.

The simple test required a sample of my blood, followed by a seven- to 10-day wait for processing. The test results took 10 days, and when I got the call, my overwhelming excitement returned. I learned the sex. but the news was followed by an “and.” For those 10 days, I had selfishly focused on learning my  baby’s sex. That “and” put the testing process in perspective. My nurse practitioner, Anna Ackerman, APRN, Norton OB/GYN Associates, informed me that I was a carrier for cystic fibrosis (CF).

What is cystic fibrosis? Could my baby have it?

Cystic fibrosis is a genetic disorder that causes recurring lung infections and difficulty breathing. The disease is known for its sticky mucus buildup in the lungs, pancreas and other organs. Patients must use a variety of treatments to loosen mucus and ease breathing, including percussion vests and medication. There is no cure for CF.

So when Anna mentioned that I was a genetic carrier, I was terrified. She calmly mentioned that the next step, if we wanted to, was to have Albert tested to see whether he is a carrier. For our little baby to have cystic fibrosis, genetic mutations would have to be passed from each of us. I have no family history of cystic fibrosis, so learning I have this genetic trait was fascinating and daunting. Where did it come from?

After calling Albert (being careful to not mention the baby’s sex), he came to the OB/GYN office to have his blood drawn for the same genetic panel. I was 12 weeks at this point. Just as we had waited 10 days before, Albert and I endured another nerve-wracking wait.

I feel like during the following week, I may have called the OB/GYN office every day asking about the results. And on the 10th day of waiting, Anna called me. Albert also was a carrier of cystic fibrosis. Anna assured me that the results only meant that we were both carriers. The way inherited genetic disorders work, there still was a 75 percent chance that our baby would not have CF.

I hung up, began to tear up and called Albert. My tears were overwhelming, ugly, crying tears. The only thought I could think, and the only thing that I could say was “I don’t want our little girl to be in pain.”

In one sentence I spoiled the surprise.

Albert also had no family history of cystic fibrosis. We went from being excited first-time parents to utter distress.

We were referred to a genetics specialist and Norton Children’s Maternal-Fetal Medicine, where I had another ultrasound and learned more about our options. At 15 weeks, we learned we could wait for a newborn screening (all babies in Kentucky are screened for CF), or we could have an amniocentesis to test her genetics. We decided we wanted to be armed with as much knowledge as possible. At 18 weeks, I would have amniocentesis to get a complete genetic panel on our little girl. A complete microarray would include a single gene test for cystic fibrosis.

The amniocentesis was uncomfortable and scary, to say the least. We both wanted to have peace of mind, or we wanted to be able to prepare.

Jamil T. Elfarra, M.D., Norton Children’s Maternal-Fetal Medicine, performed the procedure in such a calm and relaxed manner. Dr. Elfarra used an ultrasound wand to identify the baby’s location. He directed a large needle into a space filled with amniotic fluid. I began having contractions, and the muscles of my uterus began forcing the needle out of my body. I will never forget Lakesha the ultrasound technician holding my hand and reminding me to breathe so that Dr. Elfarra could get through the procedure. They were able to extract the amniotic fluid that they needed to send off to be analyzed. Another grueling wait began.

I went in for a growth scan at 21 weeks on Dec. 28, 2017. Dr. Elfarra wanted to do additional checks on the baby’s growth and heart anatomy. Albert was unable to attend the ultrasound, so I invited my mother and mother-in-law to get their first view of their granddaughter, whom we would name Hazel. After waiting a few moments, an unfamiliar face walked in the Maternal-Fetal Medicine patient room. She introduced herself as a genetics counselor and said she had the results of the testing.

I don’t remember much after that moment. I don’t know if it was mother’s intuition, nerves, anger, sadness or helplessness. She was direct and to the point, letting us know that our little girl had inherited both of our recessive genetic mutations. She has cystic fibrosis. She left the room to give us some time.

The tears welled up for all three of us. The pain of knowing this diagnosis was paralyzing. I immediately called Albert and incoherently gave him the news. That day was a blur. Dr. Elfarra was reassuring and encouraging. I knew he would provide both Hazel and me with the best care possible.

Coming to terms and preparing for a ‘new normal’

After the diagnosis, I needed time to grieve. We still would have our little girl, but our dreams of good health for her were lost.

I was so glad that we were armed with the knowledge of the diagnosis, but selfishly, I was angry. Why Albert and me? All you hope and dream for once you get pregnant is a healthy baby. That was not going to be our story. My love for this child will be infinite, but I needed time to process and give up the dream of a “perfect pregnancy.”

In the midst of grieving, all I could think about was what our “normal” would look like. What could we do in the next four months to prepare to take care of Hazel? I began to read, reach out and adjust to what caring for a CF child would mean. Each day we tried to turn our struggle into action and understanding.

My pregnancy journey can be divided into “before” and “after” the diagnosis. Before, I took for granted my growing belly, the symptoms and the care I was receiving. After the diagnosis, I know my growing belly means our little one is growing too. She is safe, and I appreciate the diligence of everyone on the care staff.

Dr. Elfarra’s thoroughness came into play during my growth scan at 26 weeks. Hazel likes to move during ultrasounds, so getting a complete view was proving to be difficult. At 26 weeks, Samantha the ultrasound tech discovered a small hole, called a ventricular septal defect (VSD), in Hazel’s heart. Dr. Elfarra  recommended that we get an echocardiogram at Norton Children’s Hospital. The following Monday we were scheduled with Brian Holland, M.D., pediatric cardiologist.

Dr. Holland explained, in nonclinical terminology, the anatomy of the heart, what was supposed to happen and where Hazel’s hole is. He said he would continue to monitor her through Maternal-Fetal Medicine  and evaluate her after her arrival.

While a hole in the heart is no small worry, it seemed like a challenge we could deal with. The benefits of knowing and the benefits of education far outweighed the burden of uncertainty.

At 31 weeks, our care team continues to monitor Hazel. We are hopeful that no more issues will surface, but Albert and I have confidence in Norton Children’s Maternal-Fetal Medicine to take care of us.