Recovered, with a renewed sense of thanksgiving 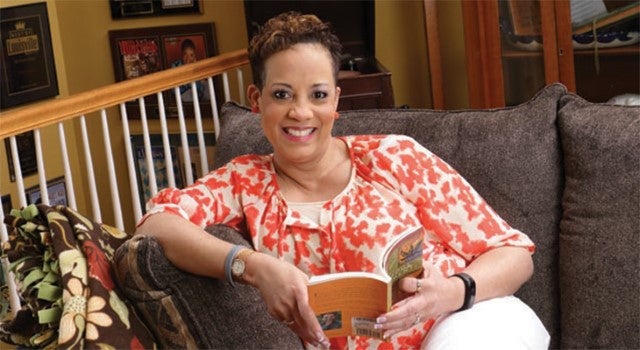 Dawne Gee, WAVE 3 News anchor and beloved local philanthropic supporter, was preparing for a busy Thanksgiving week last year. Little did she know her life would hang in the balance as she suffered a stroke on live TV.

The week of the stroke, Gee knew something wasn’t right. She visited her rheumatologist, orthopedic specialist and an immediate care center all before she ﬁnally took the doctors’ advice to rest. The night before Thanksgiving she committed to herself that for the next 24 hours she would stay off her feet, take her medication and get some rest.

“My legs were swollen two to three times their normal size,” Gee said. “And I just felt bad.”

Unfortunately a turn of events that connected with her personally and professionally called her out of the house on Thanksgiving Day. There had been a shooting at a well-known Louisville event. Her sister was there in all the chaos and the news station called on Gee to report live from the scene.

“No one really knew I had been feeling bad,” she said. “And I just kept telling myself, ‘You are tougher than this’ while I was covering the event at Shawnee Park.”

Gee eventually left the park and was back home resting, but the pain in her legs was continuing to worsen.

“I remember after the midday show on Friday my mother calling me and asking what was wrong, that I just didn’t look like I felt good during the live show. A little while later my youngest son called and asked the same thing,” she said. “I told them both that I could make it to 8 o’clock, the end of my shift. Then I would be home and could rest.”

Gee remembered having some chest pain throughout the day. She had nitroglycerin pills for angina, a heart condition that causes chest pain. By the time the 7 p.m. newscast started, Gee had taken three nitro tabs and was counting down the minutes until she could go home. She told herself to just read what was on the teleprompter, “You can do that — just read.”

“The 7:30 newscast started and I remember tossing to a weather segment and feeling like I had to sit down while I was off camera,” she said. “I could hear Kevin [Harned] doing his weather forecast and preparing to send it back to me, but by then I was sitting on the ﬂoor and wasn’t sure how I would get back up.”

With all her might, Gee was able to pull herself up to a standing position as the camera turned back to her. She tried to speak, but she had no control.

“From there, I don’t remember anything until I woke up in the emergency room,” she said.

Gee was rushed to Norton Hospital. A team of physicians, nurses and medical personnel quickly assessed her condition. Within minutes they had determined she was suffering a stroke and part of her brain was being deprived of oxygen-rich blood.

Gee recalls the emergency department physician coming in to speak to her family.

“He was telling them that ‘your mother’s window is closing’ — referring to the drug treatment — and my children were arguing about what to do,” she said.

“The key with tPA is timing. The sooner the better to save brain cells from dying,” said Nadeem A. Talpur, M.D., neurologist and medical director of the stroke program with Norton Neuroscience Institute. “In order for tPA to be effective, it has to be administered within three hours (and in some cases up to 4.5 hours) of the patient demonstrating the onset of symptoms.”

The emergency physician explained that if action wasn’t taken very soon, their loved one would be left in the state she was currently in — no movement on her left side and limited ability to speak.

“That’s not how I wanted to be,” Gee said through her tears.

Within an hour after the tPA was started intravenously, without even being aware of it, Gee was able to lift her head. Then wiggle her ﬁnger. Then lift her arm.

Her family was ecstatic. She was on the road to recovery. Then, over the coming days, while in the intensive care unit, the gravity of her situation set in. Gee was overtaken by a deep feeling of depression.

“The depression for me was real,” she said. “It felt like winter clothing that I could not shed. I wrapped myself in it.”

She credits the ICU staff for helping her rebound.

“They do miraculous things,” she said, referring to her ICU team. “They gave me exactly what I needed in the moment, whether that be encouragement or a stern talking to in order to get me out of my self-pity party.”

Gee had to learn to walk again, at ﬁrst only a few steps at a time.

Kevin (and crew) called it!

When Dawne Gee suffered her stroke on air that day in November, those around her knew the signs and acted quickly to get her life-saving help.

Chief meteorologist Kevin Harned was the ﬁrst to notice something wasn’t right.

“I noticed that Dawne was sitting on the ﬂoor rubbing her leg while I was doing the weather. I thought something was odd then, but we’re on live TV,” said Harned, long-time friend of Gee’s. “Then I noticed as she began to give the news that she was slurring a bit and having trouble reading. Within seconds she was on the ground. I yelled out to the ﬂoor crew to call 911.”

Gee attributes the crew’s fast action with saving her life.

Would you recognize the signs of stroke and know what to do if your loved one or co-worker needed help?

“It is important for everyone to remember that time lost is brain lost,” said Shervin R. Dashti, M.D., Ph.D., co-director of cerebrovascular/endovascular neurosurgery for Norton Neuroscience Institute. “If someone around you is demonstrating any signs of stroke, act FAST and call 911 immediately.”