The first study linking vaping nicotine to cancer found mice developed lung cancer or a precursor to cancer after exposure to e-cigarette vapors. 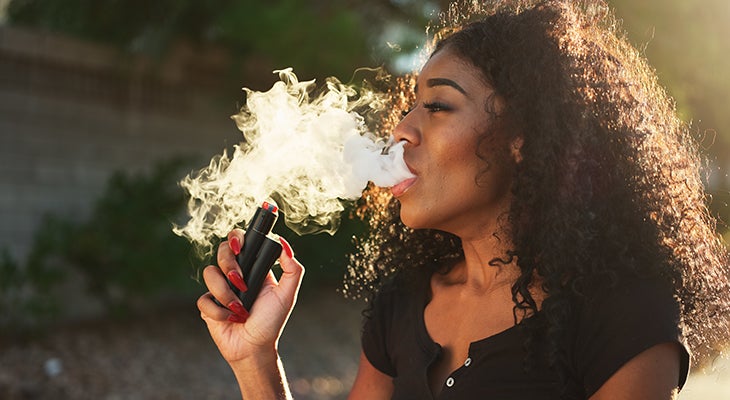 New research shows vaping’s dangers may extend beyond the recent wave of deaths from pulmonary disease, as vaping also may increase cancer risk.

The first study linking vaping to cancer found nearly 25% of mice developed lung cancer after 54 weeks of exposure to e-cigarette vapors containing nicotine. More than half the mice developed hyperplasia — a frequent precursor to cancer.

A group of mice exposed to nicotine-free vapors had no cases of lung cancer and one case of hyperplasia.

The New York University study had a small sample size — 40 mice — and the rodents experienced full-body exposure since they can’t inhale vapor as deeply as humans. Also, mice respond differently than humans.

Nonetheless, researchers concluded that more research needs to be conducted before e-cigarette vapor can be called safe.

If you’ve decided it’s time to break free of smoking, don’t try to do it impulsively. Make a plan.

“Even if there isn’t smoke, there is still risk,” said George J. Mikos, M.D., cardiothoracic surgeon with Norton Cardiothoracic Surgery. “In addition to the recent increase of fatal pulmonary illnesses linked to vaping, we now know cancer is a real possibility.”

Erring on the side of caution may be wise considering how little is known about the long-term effects of vaping, according to Dr. Mikos. After all, e-cigarettes have been sold commercially in the United States for only a little over a decade.

The National Institute on Drug Abuse reports that 66% of teens believe that they’re only vaping flavoring and nothing else. In reality, 99% of e-cigarettes sold in the U.S. contain nicotine. The Food and Drug Administration has warned that young people and pregnant women shouldn’t use any vaping product.

The Centers for Disease Control and Prevention has determined that e-cigarette vapor contains: “ultrafine particles, chemicals leading to lung disease such as diacetyl, volatile organic compounds, cancer-causing chemicals, and heavy metals such as nickel, tin, and lead.”