Emphysema vs. COPD: What’s the difference?

Emphysema vs. COPD: What’s the difference?

COPD refers to a group of lung diseases, one of which is emphysema. 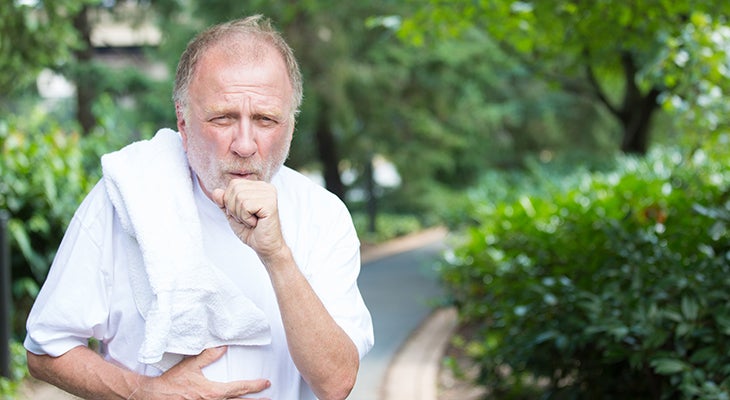 The difference between emphysema and chronic obstructive pulmonary disease (COPD) can be confusing.

“While both are chronic conditions of the lungs, emphysema and COPD refer to different aspects of the diseased state of the lungs,” said David A. Hasselbacher, M.D., FCCP, pulmonary disease physician with Norton Pulmonary Specialists. “They are related but not the same.”

COPD refers to a group of lung diseases, one of which is emphysema.

Emphysema means “full of air.” Emphysema is the gradual destruction of lung tissue, more specifically the alveoli or air sacs. The alveoli function similar to a balloon. When you inhale, air comes in, and the alveoli expand. When you exhale, the alveoli contract, pushing air out.

COPD is treatable, especially when diagnosed early. If you suffer from shortness of breath, frequent cough or wheezing, talk to your health care provider.

With emphysema, the alveoli are damaged over a period of time due to air pollution, tobacco smoke, workplace hazards and other factors that cause the walls to thin and sometimes collapse. With emphysema, when the lungs inhale and exhale air, the alveoli no longer function like a balloon but rather like a flimsy plastic grocery bag. The air that is taken in gets trapped in the lung and is unable to push out, making it harder to exhale and, therefore, harder to breathe.

There are stages of emphysema that are rated based on how much air you can blow out of your lungs in one second, commonly known as an FEV1 rating, and the number of hospitalizations in a year due to flare-ups or exacerbations. The final stage of emphysema is what is classified as COPD.

COPD is a common disease condition of the lungs making it difficult to breathe. There are two main types of COPD. Long-term cough with mucus (chronic bronchitis) or damage to the lungs over time (emphysema) both may be diagnosed as COPD.

With COPD, lung airflow is obstructed, making it difficult to breathe. Airflow may be obstructed because of damage to the alveoli as with emphysema, or by inflammation of the bronchial tubes or the clogging of the bronchial tubes with mucus from chronic bronchitis. Sometimes both emphysema and chronic bronchitis are present, compounding the difficulty to breathe.