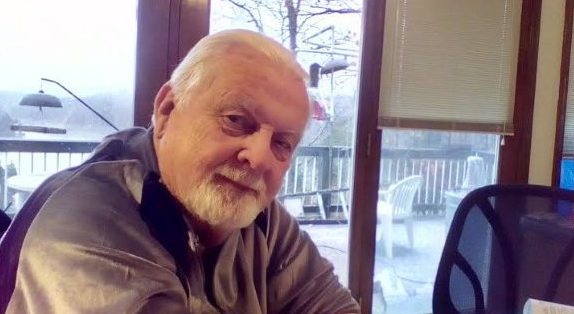 On a cold February morning, Bob Steuart was beginning his work day, leaving his Brandenburg, Kentucky, home for his job as a tax preparer. He never made it out of the driveway before suffering what could have been a fatal stroke.

Bob recalls most of what happened that morning. He said he got into his truck and started the engine, but he was not able to use his left arm to fasten the seatbelt.

His wife of 36 years, Joanne Steuart, was standing at the window to wave goodbye.

“I remember waiting while thinking, ‘What is taking him so long?’” Joanne said. “After a few minutes, I walked out to the garage and saw his lunch bag on the floor. I knew something wasn’t right.”

Joanne opened the truck door and told Bob to look at her. She remembers seeing his face and how he looked distraught.

“I asked him to smile, but the face he made was just awful,” she said. “It looked like one side of his mouth was down by his chin.”

She remembers thinking to herself, “Bob is having a stroke.”

She removed the keys from his truck and ran inside to call for help.

Joanne returned to the truck, and she and Bob held hands while waiting anxiously for help. Within 10 minutes, fire, police and emergency medical service crews arrived.

EMS confirmed that Bob was having a stroke and started preparing him for transport to a hospital. Thinking Bob was unable to communicate, EMS asked Joanne for her choice of hospitals. Bob shocked everyone when he said, “Costco — the one by Costco.”

Within minutes, Bob was transported to a helicopter pad in Meade County, loaded and in the air on his way to Norton Brownsboro Hospital, about 50 miles away and known for its expertise in stroke care. The hospital’s comprehensive stroke team was awaiting his arrival.

At Norton Brownsboro, Bob was given tissue plasminogen activator (tPA), a clot-busting drug that is given intravenously. Research shows that for tPA medication to be most effective, it must be administered within four to five hours from the initial onset of stroke symptoms.

“The tPA medication restores blood flow by dissolving the blood clot that is causing the ischemic stroke,” said Gauhar Chaudhary, M.D., neurologist with Norton Neuroscience Institute. “In most cases the medication will start to work immediately; in other cases it may need to be administered directly to the clot in the brain using a thin tube (catheter) through an artery in the groin.”

Bob was fortunate that he was able to receive the medication so quickly, thanks to his wife quickly identifying the signs of stroke.

By the time Joanne arrived at the hospital by car, Bob was sitting up in bed and responding to commands.

Lindsey R. Siewert, R.N., neuroscience clinical nurse specialist and stroke coordinator at Norton Brownsboro Hospital, told Joanne that not all patients are as successful as Bob. She said Joanne should take pride in her quick thinking to call for help when she did.

“I knew the signs of a stroke and that it was important to get help quickly, but I had no idea that timing also played a factor in Bob’s being able to receive the clot-busting drug,” Joanne said. “So now I am on a mission to tell everyone we know that if you think you are having a stroke, call 911 and get help immediately.”

Since his stroke, Bob is doing well and has returned to work and all the activities he enjoys. The next time he makes a trip to the Norton Brownsboro Hospital area, he hopes it’s to just go by and wave as he heads into Costco.

Norton Brownsboro Hospital is a Comprehensive Stroke Center, earning The Joint Commission and American Heart Association/American Stroke Association’s Gold Seal of Approval for its ability to receive and treat the most complex stroke cases.

Stroke is the fifth leading cause of death in the United States. Kentucky and Indiana are in the “Stroke Belt” — a group of states in the southeastern U.S. with a higher incidence of stroke than the rest of the nation.

The increased rate of stroke in our area is attributed to a number of environmental and lifestyle factors, including high incidences of smoking, high blood pressure and cholesterol levels, as well as a lack of understanding in how to reduce or eliminate known risk factors for stroke.

If someone around you is demonstrating any signs of stroke, act F.A.S.T. and call 911 immediately.

Do you know if you are at risk for having a stroke? Take an online stroke risk assessment to find out.