Feldenkrais incorporates slight, gentle movements that are accessible to patients with neurological diagnoses. 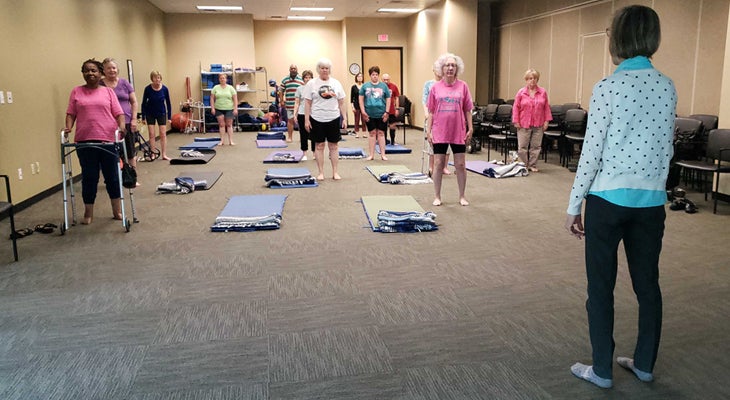 Jackie Stafford was diagnosed with multiple sclerosis (MS) in 1977. Back then, patients with MS were told not to exercise because it was thought that the increase in body temperature during exercise made MS symptoms worse.

Today, exercise is known to be beneficial for patients with MS, and Jackie is open to anything that might help her. She’s tried supplements, medications, swimming and other forms of exercise like yoga.

Feldenkrais, a technique that improves function and movement through greater body awareness, is a therapy that Jackie added to her care regimen about three years ago. She learned about the method through a Norton Healthcare educational class that featured Dorothy Henning, a guild certified Feldenkrais practitioner.

“When I first met Dorothy Henning, I didn’t know anything about Feldenkrais,” Jackie said. “But Dorothy spoke a lot about neuroplasticity, which I knew about through my own research. That’s what got me interested.”

Neuroplasticity is the ability of the brain to change and heal and form new pathways and connections through learning and experience. According to Dorothy, the Feldenkrais method is based on the principles of neuroplasticity, as well as physics, biomechanics and an understanding of learning and human development.

Related Content: How has treatment for multiple sclerosis advanced

“The Feldenkrais method is especially helpful for those with neurological disorders,” Dorothy said.  “For example, for a person with Parkinson’s disease (PD), the natural rhythm and flow of perception, feeling, and movement is disrupted. There is a disconnection between the intention to move and the ability to start or complete an action.”

According to Dorothy, the Feldenkrais method influences brain and behavior through a learning process involving movement exploration, trial and error, and problem solving.

The Feldenkrais Method is a free class offered to patients with a neurological diagnosis that is being treated by a Norton Healthcare neurologist. The class is held on Wednesdays from 1 to 2 p.m. at Norton Health & Wellness Center, 1000 Dupont Road. You can register by calling:

“Feldenkrais implements our brain’s capacity for neuroplasticity — that the brain can, to some extent, rewire and reconfigure itself to overcome some limitations imposed by PD, as well as by post-stroke, chronic pain, and other neurological disorders,” Dorothy said.

In addition to one-on-one sessions with Dorothy, Jackie attends a free Feldenkrais class, also led by Dorothy, that is offered by Norton Neuroscience Institute Resource Center.

According to Jackie, the class incorporates slight, gentle movements in the legs, arms, head and hands. Because the method uses gentle movements, it’s easier and more accessible to patients with neurological diagnoses, like Jackie.

“In the Feldenkrais class offered for patients with neurological diagnoses, we’re all in the same boat and dealing with physical limitations,” Jackie said. “So there is a lot of camaraderie and support. Dorothy has us assess our bodies to see how we feel. She knows so much about the body and teaches us how to determine where pain might be coming from.”

Since attending regular one-on-one sessions with Dorothy and participating in the Feldenkrais class, Jackie is walking better, getting up from the floor more easily and is free from neck and shoulder pain.

The Feldenkrais group class is called Awareness Through Movement. The classes consist of gentle, verbally guided movement sequences, each organized around the improvement of a different aspect of human movement and functioning, such as walking, getting up from a chair, balance, reaching and breathing.

“I recommend that people try several classes, because the longer you do it, the better you feel,” Jackie said. “During one session, I experienced a subtle feeling in my body that I hadn’t felt in so long. I was so overcome that I sat up and started to cry.”