Breast cancer survivor Denise Valente has a hero who got her through her darkest times: her fraternal twin. 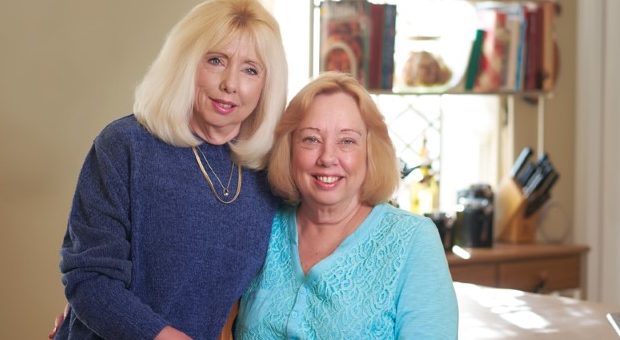 For years, Denise Valente suffered from a nonmalignant fibrocystic breast condition. Her breasts would get tender, swollen and lumpy, and she would have the cysts aspirated.

It was so predictable, in the words of the 58-year-old Valente, “I got pretty nonchalant about it.”

Then in 2010, she discovered a lump in her right breast that in time grew to the size of a golf ball. An aspiration procedure failed to remove the lump, but fluid was extracted and sent to the laboratory, and that’s when breast cancer was detected.

A mammogram is recommended for women beginning at age 40, and now appointments are available closer to you.

To make an appointment today:

“My cancer diagnosis was like a death sentence,” Valente said. “My life seemed over, and I wondered how long I had left. I wondered what kind of battle I was facing.”

The stark news followed: Her stage 2 breast cancer, though not found in her lymph nodes, was aggressive. Her treatment plan called for immediate surgery then six months of chemotherapy.

Valente would take her chemo infusions at Norton Cancer Institute – Audubon, a stone’s throw from where she has been employed for the past 28 years.

She knew she was in the best possible hands.

For her monthly chemo infusions, Valente knew she would need help daily to withstand the fatigue, nausea and other harsh side effects associated with her therapy regimen.

She didn’t have to look far. Providentially, her fraternal twin, Debbie Gahan, had moved in with her a few weeks before the diagnosis. Both were single moms with no kids at home and decided to combine households.

“I was so exhausted that, at times, I couldn’t lift myself out of bed,” Valente said. “I was nauseous, had severe joint pain and lost 25 pounds. Debbie took me to every chemo infusion and doctor’s appointment. When my head was hanging over the toilet. She never complained.”

Valente, now a five-year cancer survivor, has learned a lot about the important things in life.

“I’ve learned to go on and I don’t feel like I’m going to die anymore,” she said. “There’s life after cancer.”