From bumpy ride to baby bump

From bumpy ride to baby bump 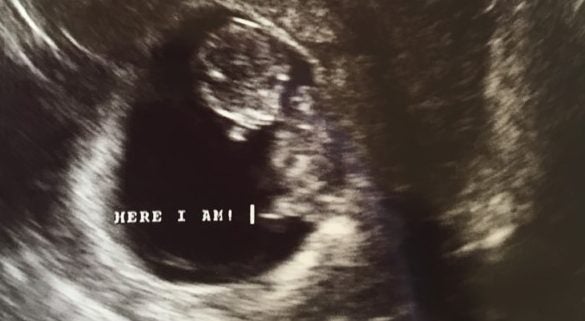 As we moved through the first trimester, every day was full of worry. Worry that I wasn’t doing everything right; worry that we would have another miscarriage.

Because I was considered “high risk” from my previous miscarriage and because I used fertility treatments to get pregnant, I had two appointments and two ultrasounds to confirm the pregnancy before the first official prenatal appointment.

The first ultrasound appointment was at six weeks, and it was not able to confirm the pregnancy. This totally freaked me out and I thought for sure that meant something was wrong.

Fortunately, my OB/GYN was able to talk me off the cliff and let me know that because of the fertility drugs, I likely ovulated three or four days later than “normal” and so the appointment was just a little too early.

We had a second appointment and ultrasound two weeks later to officially confirm the pregnancy and learned our Baby B was perfect. Perfect heartbeat at 182 (the normal range is between 180 and 190 at eight weeks, according to my ultrasound tech). Everything looked great. Finally, it was time to make the official first prenatal appointment for 10 weeks, much to our relief.

It was an interesting first few weeks. We worried about everything, always convinced that something was going to go wrong. After the eight-week appointment, we finally relaxed a little. Things were moving along just like they were supposed to. We stopped talking about all the things that could go wrong and started focusing on all the things we needed to plan for when our Baby B arrived in seven months.

Here’s what I learned along the bumpy road of my first trimester:

Ask questions. Lots of them. This is my first time on this pregnancy journey. There are a lot of things I don’t know and a lot of resources out there — maybe too many. Some of those resources can be scary — don’t do this, don’t eat that.

I basically felt like I wasn’t doing anything right and everything I ate was wrong. My doctor gave me some pretty clear guidelines of foods to avoid and what was fine to eat as long as it was cooked properly.

Don’t be afraid to ask questions. After all, this is new to you and you have no idea what is normal and what is not.

Emotions run rampant. It’s OK to be nervous, excited, scared or feeling whatever way you are feeling about being pregnant. I am lucky to have a partner who has been very supportive of me during our journey to pregnancy and our pregnancy journey. I have been on a lot of hormones throughout this process, which only increases the emotions. But that’s OK and it’s normal.

So … if you cry for no reason and can’t stop, just let it out. You’ll feel better.

Going to bed at 7 p.m. is OK. The only major pregnancy symptom I experienced during my first trimester was tiredness. That’s probably an understatement — more like immense fatigue. I don’t mean like I need to go to bed a little early, I mean by 3 p.m. I was pretty much done for the day and if I made it to 8 p.m. it was a late night.

It’s totally normal to feel this way. If you’re tired in the middle of the day, take 10 minutes during your lunch break to rest. And if you need to sleep 12 hours a night, sleep 12 hours.

Every pregnancy is different. This is a big one and one I struggled with the most. When I found out I was pregnant again, I was thrilled and hoped for a “normal” pregnancy. So, of course, I Googled all of the common pregnancy symptoms and I had one, only one, and not for a few weeks. So naturally, I was concerned. I thought if I didn’t experience the symptoms, then that meant something was wrong. But I learned I was just wrong.

No pregnancy is the same and not every woman experiences pregnancy symptoms the same. Some women experience all of the symptoms, while other women like me may only experience one all the time or intermittently. If you have concerns about your symptoms, always talk to your medical provider.

I don’t know what I’m in for during this pregnancy journey, but I do know it’s going to be an interesting ride.

With four weeks between prenatal appointment one and appointment two, my husband routinely tells me he wishes there were a window so he could just see Baby B to make sure everything is OK. I assure him that if something was wrong we would know and we’ll get to see Baby B soon enough.