Graduating from 12 years of surgeries

Graduating from 12 years of surgeries 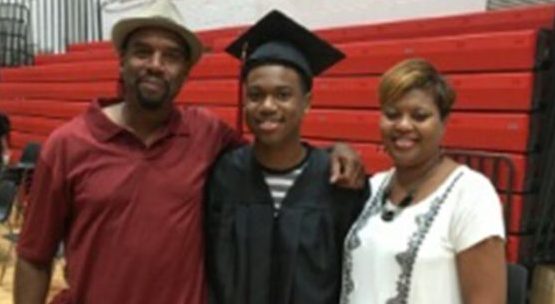 Shearice Harrison cheered just like any other mom as her son, Jerren, walked across the New Albany High School stage to get his diploma. But she wasn’t just celebrating his academic achievements; she reveled in the fact that her son was alive to see this day.

“I held my baby, who was just a few months old, convinced he was going to die,” Shearice said. “To see him become the young man he is today and going to college after such a long and winding road is indescribable.”

At 6 weeks old, Jerren started breathing funny and not acting right. Shearice took him to Norton Children’s Hospital, where doctors discovered a serious strain of bacterial meningitis. Had Jerren gone without treatment just a little longer, he likely would not have made it to his first birthday.

Fortunately, the doctors were able to treat the meningitis, but the infection left a catastrophic effect. It destroyed the growth plates in his thigh and shin bones.

Left untreated, Jerren’s body would have continued to grow as normal, but his legs would have remained the size of an infant’s.

“It was a terrifying ordeal,” Shearice said. “As a new mom I didn’t know what to do.”

Dr. Jacks created a plan: She would perform a series of intense leg-lengthening surgeries on young Jerren.

Dr. Jacks cautioned that this would be far from a one-and-done ordeal. It would require going under the knife more than 30 times in 12 years to ensure Jerren’s leg growth kept up with the rest of his body.

“I’ve seen patients with similar issues but not to the extreme of Jerren’s,” Dr. Jacks said. “We knew early on that it would be a long, difficult and painful road, but we were going to take that journey together.”

As one could expect, Jerren has been no stranger to living in pain and spending a lot of time in the hospital.

“We were in and out constantly,” Jerren said. “Surgery after surgery — pain became part of the routine. My legs always had to adjust to the rest of my body.”

“As a mother it was very challenging to see him go through this,” Shearice said. “But Dr. Jacks was great. Anything we needed she and the hospital staff provided us. We couldn’t imagine working with anyone else.”

The routine and uncertainty of surgery also helped shape Jerren’s outlook on life.

“At first I was scared of the needles and seeing my own blood,” he said. “But I always found a way to get through it. Then I decided I was going to think positive no matter what. I had to best doctors and nurses you could ask for. Thinking positive sort of became a motto.”

Jerren had his final lengthening surgery in 2014. He’s able to run and walk. He even just wrapped up his tenure on New Albany High School’s track and field team. He also loves basketball and was the Bulldogs’ student manager.

“I wasn’t able to play basketball because of my condition,” he said. “But I love being around the sport. I take pride in being the team’s hype man, getting everyone — from my teammates to the fans — fired up.”

As Jerren plans to head to Indiana University Southeast this fall to study communications with a concentration in public speaking, both Shearice and Dr. Jacks can’t help but reflect on the young man he has become.

“His attitude is so inspiring,” Shearice said. “He has such an impact on the world around him — people gravitate toward him in a very positive way. As a mother, what more could you ask for?”

“I love Jerren like he’s a child of my own,” Dr. Jacks said. “Given what he’s been through and how he’s overcome so much adversity, I know he’ll do great things in this world.”

“As long as you have a positive attitude, there’s nothing you can’t achieve,” Jerren said. “I’m living proof.”