Hairdresser comes back from near career-ending hand injury

Hairdresser comes back from near career-ending hand injury 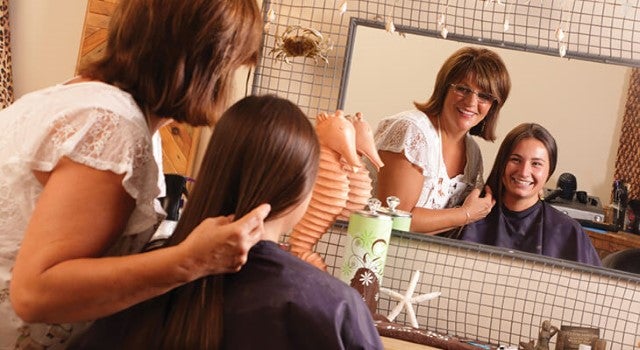 Being a hairdresser is all Amy James ever wanted to be.

“I remember styling my Barbie doll’s hair and telling my mom I wanted to be a beautician,” James said.

Her dreams came true when she opened her own salon in 2000. So when James was faced with a possible career-ending injury, she was devastated.

“I love my job, seeing clients who have become friends over the past 35 years every day and making them feel beautiful is something I enjoy,” she said. “I wasn’t ready to give that up.”

In March 2016, James was cutting hair four days a week while renovating a newly purchased farmhouse with her husband. The plan was to update the home in their spare time, but she jumped right into painting several rooms in the ﬁrst few weeks.

Amit Gupta, M.D., and several of his colleagues at Louisville Arm & Hand have been chosen by their peers as 2017 Louisville Magazine Top Docs. The winners are published in the August issue.

The physicians and advanced practice providers provide comprehensive evaluation and customized treatment plans for conditions and injuries of the arm, elbow, wrist and hand.

For more information or to schedule an appointment, call (502) 629-HAND.

“I told my husband my wrist was killing me,” James said. “He joked with me that I was just trying to get out of doing the work because he knows I don’t like to paint.”

She picked up a wrist brace at the local drugstore and powered through work and home renovation projects, but the pain grew more intense.

James realized it was time to seek medical treatment. That summer, she was diagnosed with carpal tunnel syndrome, then given a cortisone shot and stabilizing brace with instructions to follow up in six weeks.

“The shot was excruciating and the entire six weeks just led to more pain,” she said. “I contacted the provider to see what the next steps would be and found out it would be another round of cortisone shots and time — I never went back.”

James eventually sought a second opinion at Louisville Arm & Hand and was seen by Amit Gupta, M.D., hand surgeon. After a thorough exam and X-ray, Dr. Gupta diagnosed her with Preiser disease. This is a rare condition in which blood supply is reduced to part of a bone, causing it to die.

“There is a lot of uncertainty to what causes Preiser disease,” Dr. Gupta said. “The bone that is impacted, the scaphoid bone, is a critical bone. It is the bone that crosses the hand and connects the two sides together.”

Dr. Gupta discussed the diagnosis with James and explained that surgery was the best option. He recommended a fusion of bones in the wrist that would relieve pain and improve grip strength so she could get back to work.

“CRPS occurs when there is hyperactivity of the sympathetic nervous system [which controls the body’s ‘ﬁght-or-ﬂight’ response],” Dr. Gupta said. “It can occur after any type of surgery and is extremely painful.”

Tearfully, James described the pain associated with CRPS as the worst pain she had ever felt in her life. She was fearful she would never regain the use of her hand. Dr. Gupta referred her to physical therapy immediately once the CRPS was discovered and, through special therapies and exercises, it subsided.

James’ entire recovery process was about ﬁve months. After easing back into her work schedule, she is now happily back to doing what she loves.