It wasn’t until Curtis Tolson received a hip replacement at Norton Orthopedic Institute that he finally accomplished his longtime goal of winning the Masters Track Cycling World Championship. 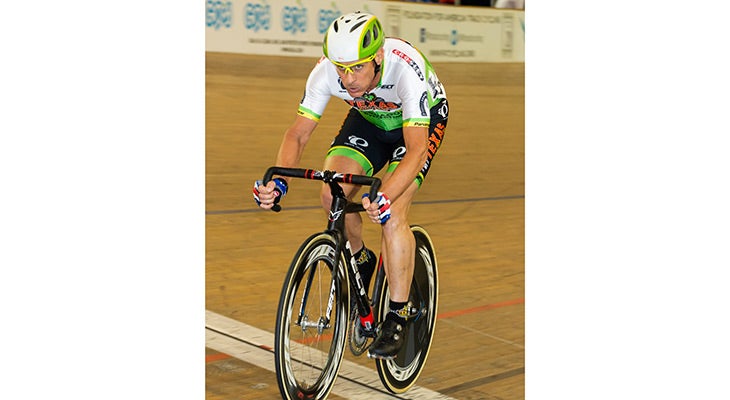 With each powerful pedal, 55-year-old Curtis Tolson propelled himself closer to the finish line. He was determined to step off his bike a champion. Not just a champion. But a world champion.

He’d competed in this race before. Four times, actually. But something was different this time. He was stronger. This time, one leg wasn’t picking up the slack of the other. Both were pedaling with equal measure.

He rounded the final bend of the indoor cycling track in Los Angeles and darted past the finish line, beating out athletes from North America, South America, Europe and Australia. He was taking home the gold in his age group. He also took home another world champion title in a team race.

Surgeons replaced Curtis’ right hip, which had developed osteoarthritis. Curtis had been pushing through the pain, but he was losing strength in his right leg. He knew it was holding him back from accomplishing his longtime dream of becoming a Masters Track Cycling world champion.

Hip replacement surgery gave Curtis symmetry of power, which is important in cycling. Cyclists aim for 50 percent power production from each leg during pedal strokes. His left leg was compensating so much for the lack of power in his right leg that he began sitting off-center on his bike saddle, causing back pain.

“The dramatic part was I was ready to just quit racing,” Curtis said. “My hip problem was going to put me out of racing and everything I like to do.”

The technique allows for faster recovery by accessing the hip from the front, below the waistline. Traditional hip replacement surgery entails incisions from the side or the back.

Since there’s no cutting of muscle away from the femur, like in the posterior approach, there is less muscle damage, which leads to less pain, faster recovery and less dislocation risk.

Surgeons spread Curtis’ muscles apart to access the hip joint. They removed the upper part of the femur, as well as the arthritic ball and socket, and replaced them with implants made of titanium, ceramic and polyethylene.

For many patients, like Curtis, they go home the same day.

“I walked out of the hospital that day,” Curtis said. “I was a little sore, but considering they sawed a portion of my femur off and replaced it with an implant amazes me that I was able to walk out of there with just a cane.”

Pedaling within days, riding within weeks and preparing to compete

Eleven days after surgery, Curtis was back to cycling. He began pedaling on a stationary bike without any resistance. Within six weeks he was cleared to ride outside.

It takes about three months to get 100 percent recovered.

When Curtis started his hip replacement journey, he had a two-year plan to achieve his goal of becoming a cycling world champion. He figured that would give him enough time to recover and train.

He underwent surgery in November 2016.

In October 2017 he competed in the cycling world championship to see how his new hip would fare.

“While I could go out and ride all day, I didn’t yet have the real high-end explosive power back, yet,” Curtis said. “And in cycling, you live and die in a race by that.”

He didn’t expect a spectacular performance, yet still he outperformed how he’d done in the world championship several years prior to his hip issues.

When the Masters Track Cycling World Championship came around again this past October, Curtis was stronger than ever and was confident he had what it was going to take to win.

“During that race it was in the back of my mind that everyone knows you have an artificial hip; they’re turning it into an excuse for you — so let’s prove that it’s not a handicap, and I did,” Curtis said.

And he doesn’t plan to slow down anytime soon.