How I took on Capitol Hill | Norton Healthcare Louisville, Ky.

How I took on Capitol Hill

How I took on Capitol Hill 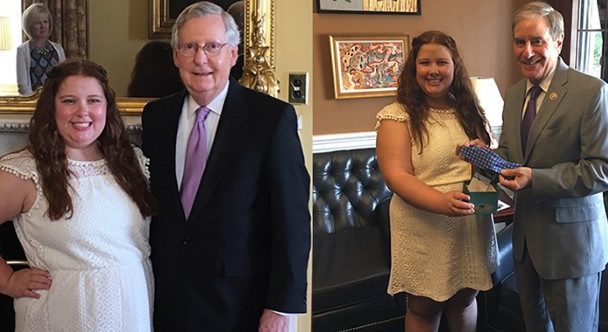 Anna-Maria Beck, a 17-year-old Sacred Heart Academy student with an inoperable brain tumor, led a delegation to Washington, D.C. Beck, along with a team from Norton Children’s Hospital, met with lawmakers to push new legislation, including the Advancing Care for Exceptional Kids Act of 2015 (ACE Kids Act), which would make it easier for children on Medicaid to get the health care they need. Beck shared this about her journey:

I had so much fun on my trip up to Washington, D.C.! From meeting with doctors to talking with lawmakers to attending events with other sick kids from around the country, I was extremely busy. Still, the experience was amazing and one that I’ll remember for the rest of my life.

I had to take care of some personal business first. Some of my doctors helping to fight my brain tumor are in the nation’s capital, so I paid them a visit. I met my new eye doctor and ran some tests, one of which involved a machine they actually used in an old James Bond movie. I also had a nice visit with one of my favorite nurses.

Then it was time to prepare for my mission of championing health care for all children to our nation’s leaders. First, I attended a lunch and official government briefing. Here, I learned what to expect in my one-on-one meetings with Senator Mitch McConnell and Representatives Andy Barr, John Yarmuth and Brett Guthrie. It was a lot to keep track of — I understand why they have legislative aides. The more I learned about the process, the more excited I became.

During the briefing I also met other kids who flew to Washington to advocate for patients in their states. The leaders of the event gave us “trading cards” that had our photos and a few personal facts. When the smaller kids asked for my card I told them my name was Princess Anna, in reference to the movie “Frozen.” Their reactions were hilarious. I received some really big grins.

The next day we embarked on the Capitol. I kind of felt like Elle Woods in “Legally Blonde 2.” I was ready to take on Washington.

First up, my meeting with Sen. McConnell. He was extremely kind and listened to my story and my goals. We talked about health care and the importance of supporting Kentucky’s sick and injured kids. I presented him with a gift — a bow tie I custom designed for Norton Children’s Hospital’s Bourbon & Bowties event. In return, he autographed a copy of his book. What a great experience!

After that we dashed over to the Russell Senate Office Building to meet with Rep. Barr. He was really sweet as he ducked out of a committee hearing for a few minutes to hear about our cause. We took some great photos. I also gave him and other members of Congress customized bow ties.

After lunch we met Rep. Yarmuth. He had really cool Kentucky memorabilia in his office, including a poster of Muhammad Ali, University of Louisville swag and (my favorite) a digital “countdown to Derby” sign hanging on the wall. We hit it off quite well.

Last, but not least, we had a great meeting with Rep. Guthrie. He spent a long time talking to me and was very warm and friendly. He was very interested in my experiences at Norton Children’s Hospital and other hospitals and seemed to really empathize with kids going through challenging times.

We wrapped up the day with a nice reception. I was so sad to say goodbye to all the other kids — we had formed a pretty tight bond in a short amount of time. The next day I saw one of my doctors and then hopped on a flight home.

Reflecting back on my few days in the nation’s capital, I can say it was an eye-opening journey. I experienced things that few adults get to, much less kids and teens my age. Our lawmakers were warm, welcoming and very supportive. I felt proud to be from our great commonwealth.

I’m so honored to share my unique experiences with our country’s leaders and be a voice for not only kids in Kentucky, but across the nation. As Congress pushes its legislative agendas, I want to make sure they keep sick kids at the forefront of their minds. I believe my story and journey will help accomplish that goal.