How to avoid common wrestling injuries

How to avoid common wrestling injuries 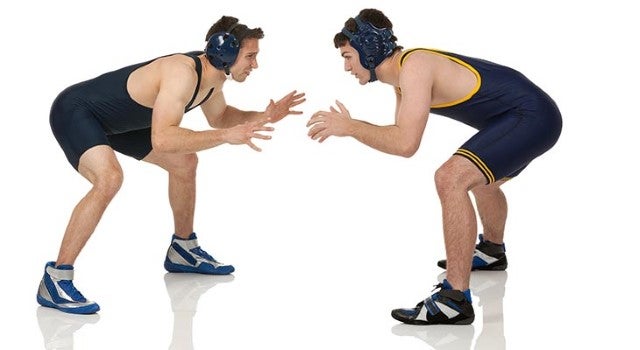 Wrestling is a sport offered to both males and females of all ages and levels, including Olympic competition. While the rules of the sport — such as dividing up competitors based on weight, experience or age — help prevent some injuries, they cannot prevent all injuries. Below is a discussion of some of the most common injuries seen in wrestling.

Due to the amount of force put on these joints in certain holds and positions, there is always potential for dislocation. Dislocation occurs when the joint comes out of place. Always using proper technique can greatly decrease this type of injury. Referees also are trained to spot illegal holds that place too much pressure on the joints.

How to prevent: Strength training focusing on biceps, triceps, deltoids and rotator cuff, as well as flexibility of the shoulder, elbow and lower arm

Sprains occur most commonly to the inside (medial collateral ligament) or outside (lateral collateral ligament) of the knee. Typically, an injury takes place when an opponent is attempting a takedown (single or double leg) and the knee gets forcefully twisted inward or outward from the midline. Minor sprains typically can be treated with rest, ice and some basic rehabilitation exercises. The athlete is usually able to return to sport once the pain subsides. More serious sprains need to be treated by a physician.

How to prevent: Strength and flexibility training for the quadriceps and hamstrings

While many people don’t associate wrestling with concussions, more concussions happen in wrestling than any other NCAA sport per number of competitors. Concussions can occur when a wrestler takes his opponent down to the mat with an aggressive throw and the athlete lands on his head, or when two wrestlers butt heads while attempting a shot at the same time. Concussions are serious injuries that need to assessed and treated by an athletic trainer or physician. The athlete should always follow proper return-to-play protocols. Returning to competition without proper treatment or too soon can have serious consequences, including death.

How to prevent: Always using high-quality mats and headgear can help prevent some concussions.

Skin infections can spread quickly from team member to team member. The most common types of skin infections in wrestlers are herpes simplex, ringworm and impetigo. Serious infections such as staph and MRSA also can develop, so taking steps to prevent infection is crucial.

How to minimize risk:

Signs of skin infection include red spots, oozing cuts, itching, hot or tender spots. Any athlete with a possible infection should consult a doctor immediately.