If determination could repair an injury | Norton Healthcare Louisville, Ky.

If determination could repair an injury

If determination could repair an injury

After 20 years of pain, golf enthusiast swings back into activities she had to give up 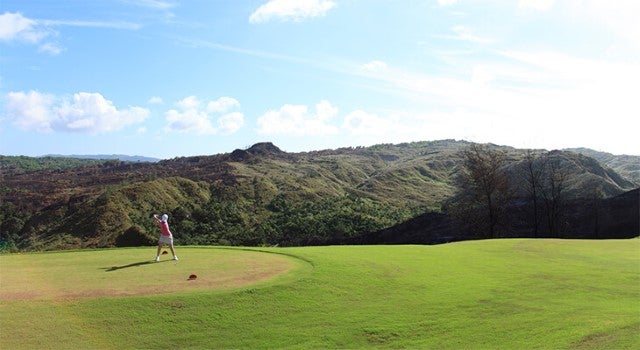 Did it happen when she was playing tennis or starting the lawn mower? Linda Newell’s shoulder injury happened so long ago that she can’t even remember what caused it. Regardless of the reason, she suffered in silence for the next 20 years.

“Each day, the pain got worse, and I got more determined that it would go away,” Newell said.

By 2011, she couldn’t lift a suitcase, adjust the seat on her bicycle or place a bag in the overhead compartment when she traveled. More important, Newell had given up golf, a passion she enjoyed with her son, daughter and husband.

“I just love being outside, the beauty of it, and the way you can play by yourself or with other people,” she said.

Newell’s turning point came on a vacation with friends and family. After completing a 30-mile bike ride, she was in excruciating shoulder pain. Her companions suggested a massage, but even that didn’t help. She returned home from vacation ready to overrule her lifelong aversion to seeing a doctor — but with no idea where to start.

Soon afterward, Newell mentioned her shoulder pain to a familiar customer at the clothing store where she works part-time. That customer just happened to be married to Ryan Krupp, M.D., orthopedic surgeon with Norton Orthopedic Specialists. As director for sports health for Norton Healthcare, Dr. Krupp specializes in treating sports-related injury, especially when they involve the shoulder. By the end of the day, Newell had an appointment.

“I throw my praise up to God because the timing was right and He led me to a good doctor,” said the 68-year-old golf enthusiast.

Dr. Krupp ran a series of tests and discovered that Newell’s shoulder joint had deteriorated to a bone-on-bone condition.

“Linda’s shoulder condition had already deteriorated significantly and as more time elapsed, she would continue to lose even more function as well as valuable bone stock, making the required shoulder replacement more difficult or even impossible,” Dr. Krupp said.

He also was explicit about her hopes for returning to golf. She needed to follow his restrictions carefully, then buckle down and work hard in physical therapy following the surgery, which took place in December 2011.

Four months later, she was lifting weights at the gym for the first time in decades and back on the golf course, playing her beloved game. Newell credits her recovery to exceptional care — and something else just as crucial: her own commitment to following her doctor’s rehabilitation orders.

Someone once asked her if the pain of rehab is comparable to having a baby. Newell answered with a decisive “yes.”

“Sometimes I would lay on the table during our workouts and I would just want to cuss,” Newell said.

Instead, she repeated a one-word mantra of perseverance: golf, golf, golf.

Newell calls her decision to have shoulder replacement one of the best moves she has ever made. She only wishes she had done it sooner. Now pain free, she hardly thinks about her age. Instead, she focuses on working her way through a bucket list of experiences, including last year’s trip to the Masters Golf Tournament in Augusta, Georgia, accompanied by her two children and a son-in-law.

“The joint keeps getting better,” she said. “Dr. Krupp can give you a new joint, but you’re the one who has to make it work.”