Justin Hardesty has been seizure-free for nearly a year 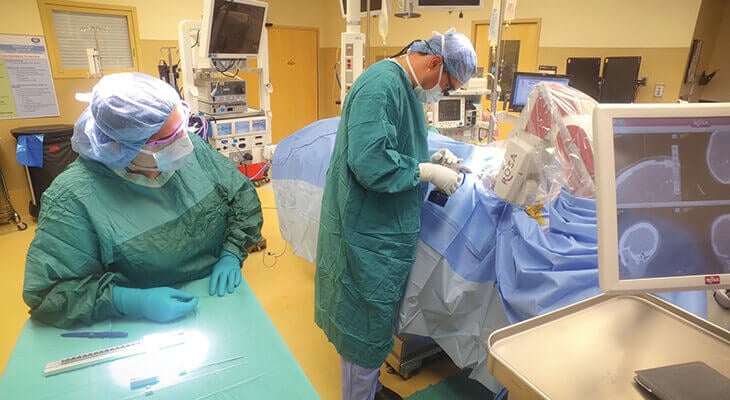 Justin was all too familiar with seizures, but this one was different. He was diagnosed with epilepsy at age 8 after having a grand mal seizure, which caused him to lose consciousness, get extreme headaches and experience violent muscle contractions.

Doctors put him on various medications, which seemed to be controlling the condition. So when Justin experienced what is known as a tonic-clonic seizure at age 25, he didn’t know what to make of it.

“It was like my heart wanted to jump out of my chest,” Justin said. “There were days when I could hardly function. It was miserable.

“The results showed scar tissue on Mr. Hardesty’s brain could be the cause of his seizures,” Dr. Dotson said.

Dr. Dotson referred Justin to David A. Sun, M.D., Ph.D., neurosurgeon with Norton Neuroscience Institute. The goal was two-fold: Confirm the exact spot in the brain that was causing the seizures; and remove the problem area.

Step one involved placing probes in Justin’s brain designed to “listen” for the problem area. Dr. Sun inserted the probes with the assistance of the newest generation of robotic neurosurgery technology, called ROSA. Before ROSA, this procedure could take hours. Now, it can be completed in minutes.

“I set the entry point, target and safest trajectory, while the robot assistant ensures that I stay exactly on it,” Dr. Sun said. “With ROSA, I’m getting improved accuracy, and I’m doing it through tinier and tinier incisions.”

After the procedure, Justin went off his secondary medication for several weeks. The goal was to have a seizure so the probes could pinpoint the location.

The probes did their job. The scar tissue was causing the seizures.

Now that the problem had been located, it was on to step two: removal. Justin was given two options. The first was to cut open his skull and remove the tissue. It would be an invasive procedure and would likely result in the removal of some healthy brain tissue.

The second option was laser ablation surgery using technology called NeuroBlate. Instead of physically removing the lesion, NeuroBlate uses the latest in image-guided laser technology to destroy the problem area from within the brain. Norton Healthcare was the first hospital in Kentucky to acquire NeuroBlate.

“Laser therapy uses real-time magnetic resonance imaging (MRI) to guide a laser probe that can be precisely controlled to kill abnormal tissue while doing as little harm as possible to surrounding healthy tissue,” Dr. Sun said. “And it’s minimally invasive — the incision is about the diameter of a pencil.”

For Justin, the choice was simple.

“I immediately decided on the laser ablation,” he said.

The procedure was a success.

“I haven’t had a seizure since before the surgery — and that’s been almost a year,” Justin said. “I’m currently being weaned off my tonic-clonic medication. It feels like a weight has been lifted off my shoulders.”

Looking back, Justin is grateful for choosing the new technology to aid in his surgeries.

“Robots have the ability to be super-precise,” he said. “Combine that with the expertise of a surgeon and I felt I was in great hands. I feel like it also saved part of my brain.”

And while Justin likely will remain on medication to control his grand mal seizures, he says his life has greatly improved.

“I’m so appreciative,” he said. “It’s amazing how this procedure transformed my life.”

The First Seizure Clinic is a place to turn for a quick and accurate diagnosis after the onset of symptoms for patients ages 5 and older.