'If you have the opportunity to do something you don’t normally do, do it.” 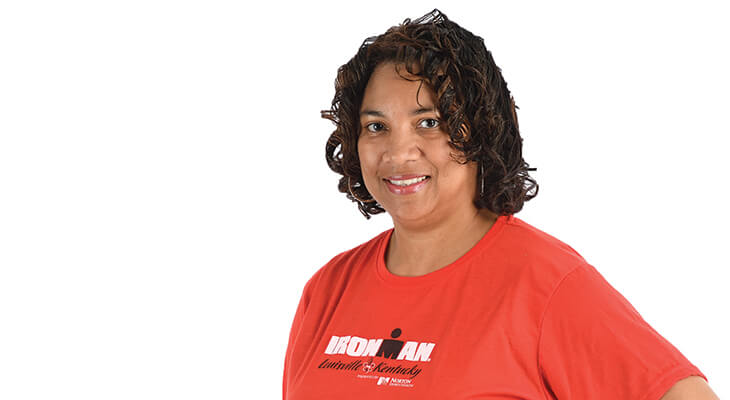 “If you have the opportunity to do something you don’t normally do, do it.”

Cooper, diagnostic scheduler, Centralized Scheduling, practices what she preaches. Six years ago, when she was asked if she wanted to volunteer at the upcoming Ironman Louisville triathlon, she jumped right in. She didn’t know much about the event when she volunteered to work in the medical tent, but as she recalls, she knew “it was a tough race.”

Through the years, Cooper has learned what it takes to become an Ironman: a grueling 2.4-mile swim, 112-mile bicycle ride and 26.2-mile run. Competitors must complete the race in less than six hours to be considered an Ironman. She has met countless numbers of these tough athletes, who underscore why she volunteers.

“When I first started volunteering, it was just about helping,” Cooper said. “Then it became much more than that. It became about helping the athletes — the men and women who are doing these incredible things.”

“It’s hard to tell the story of Ironman athletes without the volunteers,” Jurich said. “They are as critical to the race as water and bicycles. The volunteers are the backbone of the event.”

Cooper volunteers in the medical tent, registering athletes for medical attention and discharging them from the tent after treatment. Her “race” day starts at noon on Sunday and lasts until 1:30 a.m. on Monday, 90 minutes after the course is closed for finishers.

Cooper spends all day cheering on athletes and offering assistance, balancing compassion and customer service. Yet Cooper said it’s often the athletes’ compassion that stands out.

“Many of the athletes stop in and say, ‘Thank you for being here’ or give us high-fives,” Cooper said. “Even athletes who don’t use our medical services come by and say thanks for being there. It’s the athletes that make me feel really appreciated.”

Cooper said she doesn’t see herself ever participating in the Ironman, but she will continue to be one of its biggest supporters.

“I’m just so thankful and honored to have the opportunity to help out at this event,” she said.