MiniMarathon runner reunites with doctors who helped save his life

MiniMarathon runner reunites with doctors who helped save his life

After nearly dying on the miniMarathon course, runner reunites with doctors who helped save him 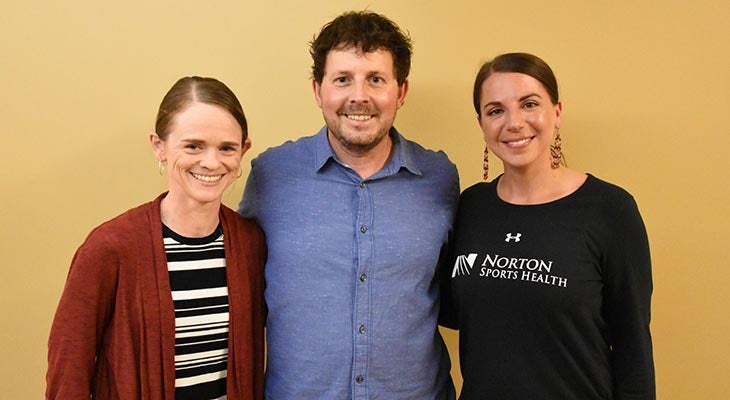 But David, a 42-year-old father of three from Prospect, Kentucky, never finished the 13.1-mile run. Instead, he almost died on Main Street in Louisville.

“I thought I just needed to stop and catch my breath,” David said. “That’s the last thing I remember.”

His shortness of breath wasn’t from the running — he’d been training for the race for months. It was because an aortic valve, which controls blood flow through the heart, stopped working. David collapsed. He stopped breathing.

Norton Healthcare doctors to the rescue

Patricia L. Isaacs, M.D., is a family medicine physician with Norton Community Medical Associates – Clarksville. During the miniMarathon, she volunteers to work in the medical tent for Norton Sports Health, the official medical provider for the race. On a typical race day, doctors treat runners for heat exhaustion, dehydration and blisters.

“But we’re prepared for anything and everything,” Dr. Isaacs said.

She was working that day with Robin G. Curry, M.D., orthopedic and sports medicine physician with Norton Orthopedic Institute.

Drs. Isaacs and Curry heard the commotion when David collapsed. When someone yelled out for a stretcher, the doctors’ jog to the scene became a sprint. Within moments, they discovered David’s lifeless body. Two bystanders, who happened to be nurses, had jumped the course’s fence and started CPR.

Dr. Isaacs assessed the situation, and David’s odds weren’t good. He didn’t have a pulse.

“People in his situation have less than a 50% chance of survival,” Dr. Isaacs said. “We had to act quickly.”

While the nurses were doing compressions on David’s chest, an emergency medical services team arrived and Dr. Isaacs worked to pump oxygen into David’s lungs. For nearly six minutes, the medical team worked feverishly against the clock.

“Everyone was doing their part,” Dr. Curry said.

Beating the odds of survival

After a combination of chest compressions, a defibrillator and medication, David’s heart started beating again. He awoke to the crowd around him and to Dr. Isaacs’ voice.

“I thought I’d just passed out,” he said. “I wanted to get up, finish the race, and get home.”

But Dr. Isaacs, who was now tasked with keeping David calm and on the ground, told him that wasn’t going to happen.

“I told him he was going to the hospital and that he didn’t have a choice,” she said. “But I also wanted to reassure him he was in good hands.”

Minutes later, David was in an ambulance and on his way to surgery. Drs. Isaacs and Curry went back to the Norton Sports Health medical tent to treat other runners for their injuries.

“Just another race day, plus a bit of excitement,” Dr. Curry said.

Reuniting with those who saved his life

After a hospital stay and several weeks of recovery, David wanted to meet the team that saved his life. He reunited with Dr. Isaacs and the Norton Sports Health team. His kids brought homemade thank-you cards. There were hugs and tears.

“Seeing them again is awesome,” David said. “Had they not been there, I know I would have died. My kids would be without their dad.”

He had especially kind words for Dr. Isaacs.

“She was one of God’s angels put in my path,” he said.

Despite his near-death experience, David wants to achieve his goal of finishing the 2020 Kentucky Derby Festival miniMarathon.

“My wife isn’t on board with the idea,” he said, “But we’ll see how my recovery goes. If I’m able to train, I’m hoping it’ll happen.”

If he does, the Norton Sports Health team will be there.

“I hope he comes by and says hello,” Dr. Isaacs said. “Though this time, I’d prefer he cross the finish line on his own.”