As a volunteer with Norton Healthcare Prevention & Wellness and a practice supervisor, Janet Farfan connects the Latinx community to health care. 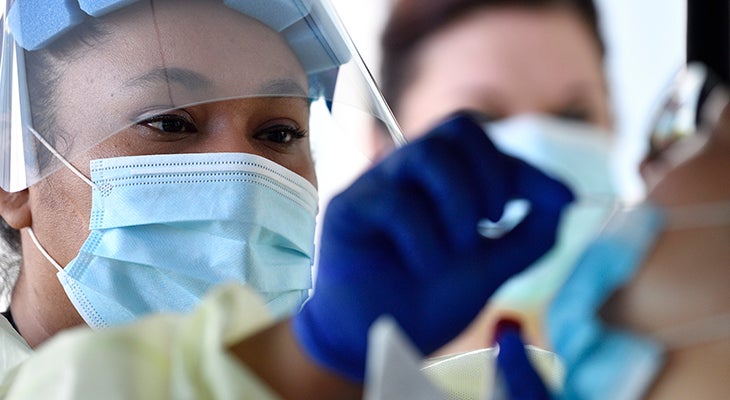 Janet Farfan says that when she’s out shopping at one of the many Latin supermarkets in town, she gets recognized as “La Señora del Norton” — loosely translated to “The Norton Lady.”

She’s earned the moniker in the Latinx community through her volunteer work coordinating the Norton Healthcare Mobile Prevention Center and as a practice supervisor with Norton Surgical Specialists – Louisville General Surgery.

“It’s been a blessing to represent Norton Healthcare in my community,” Janet said. “People know that they can come to me to answer questions or find a way to get them help.”

During her time with Norton Healthcare Prevention & Wellness, she’s become well known by Latinx-serving organizations in Louisville, including La Casita Center. Organizations have called her asking for help on behalf of patients who couldn’t access services or find a provider who spoke Spanish.

One of our core values means that whether you are a patient, community member or employee, your Norton Healthcare experience should be one that is respectful, supportive and compassionate.

“La Casita reached out to me on behalf of a woman who had gone to a non-Norton hospital for an emergency colon issue and needed (colon surgery). The hospital she went to denied to perform the surgery … due to financial issues,” Janet said.

Janet provided the case to the surgical team in the practice she supervises. La Casita worked with the patient to help secure a down payment for the procedure, and Janet helped the woman apply for financial assistance.

“This is why I love being the bridge,” Janet said. “If it wasn’t for that relationship with the community, she would have struggled. We were able to help her get the surgery she needed, and she’s doing great.”

A lifetime of helping and growing

Janet found this desire to give back to the community in adolescence. Her mother and grandmother both had diabetes, and seeing their struggles with health care pushed her to make it better for others.

Janet’s mother was born in Mexico but raised in Southern California, where Janet grew up.

“There was a language barrier; she had a lot of struggles. First-generation children often are left to be interpreters for their parents. So I have been doing this my whole life — now I’m able to help as a certified medical interpreter,” Janet said. “Seeing that need firsthand opened my heart, and I thought, ‘now that I’m an adult, I can be that support for my community that needs me.’”

More than half of Hispanic/Latinx American adults are expected to develop Type 2 diabetes in their lifetime, according to the Centers for Disease Control and Prevention. They have other health risks, including poorly controlled high blood pressure and a lower rate of screenings. According to Janet, providing patient education that is culturally relevant, in the language understood best by the patient, yields the best outcomes.

The Hispanic population also has been disproportionately affected by COVID-19, and the language barrier has certainly played a role in that trend. Janet has done her part to combat both issues simultaneously by volunteering to administer COVID-19 tests and to serve as an interpreter at community COVID-19 testing events.

While working in the practice or volunteering with Norton Healthcare Prevention & Wellness, Janet still finds time for herself. She’s working on a degree in business management with Sullivan University, through Norton University.

“I want to continue to grow as a leader,” she said. “I want to be able to lead diverse clinics.”