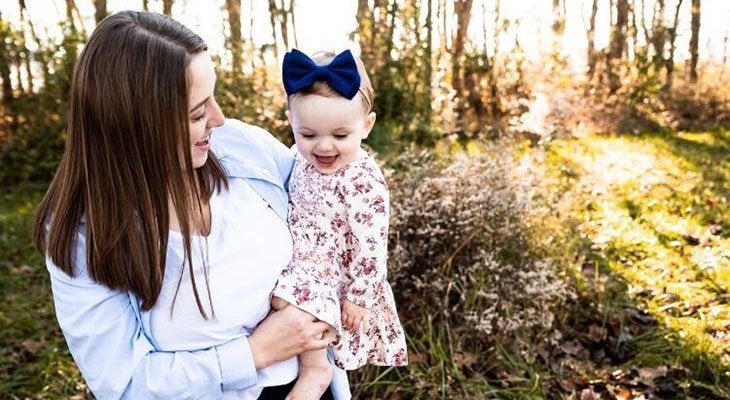 During her pregnancy, Abbey Hutchason knew she wanted to breastfeed exclusively. She worried that extensive preparation might cause her anxiety during pregnancy. She hoped when the time came, she would know what to do. Abbey credits the Norton Healthcare lactation consultants who worked with her for helping with some of the challenges she experienced.

In March 2019, Abbey learned she was pregnant. She worked with Kathryn Kersting, M.D.,  OB/GYN with Advocates for Women’s Health, a Part of Norton Women’s Care, during her entire pregnancy, including delivery. Abbey called her pregnancy “textbook,” with no issues. She knew she wanted to breastfeed, but as she did research about it, she began to feel anxious.

“I would read things, and I was like — I know I want to breastfeed, but I’m just going to wing it, and I’ll get there when I get there,” Abbey said.

According to Abbey, daughter Adalynn was born in November 2019 without complications, at Norton Women’s & Children’s Hospital. Abbey began her breastfeeding journey soon after. Adalynn had trouble latching on one side, so lactation consultant Natalie Brown, R.N., IBCLC, RLC, worked with Abbey to address the issue.

“She helped me learn how to use the nipple shield,” Abbey said.

Abbey went home from the hospital feeling confident about breastfeeding. However, she was experiencing a lot of pain. She had never planned to pump, as she wanted to nurse exclusively, but in talking to Adalynn’s pediatrician, they suggested that Abbey pump and offer Adalynn pumped milk afterward to see how much she would take. In doing so, Abbey said she experienced an overflow of breastmilk.

“I thought everything was fine,” Abbey said. “But I was in a lot of pain, and I thought that’s how it was supposed to be, without having done this before. Two weeks after Adalynn was born, I went to my OB to get checked, and she saw what my nipples looked like. They looked like they had holes. And she was like, ‘Oh my gosh, no! This isn’t right.’”

Abbey’s obstetrician referred her to lactation consultant Tina Martin, LPN, IBCLC, RLC. Tina performed a functional  breastfeeding assessment and weighed Adalynn before and after a feeding to see how much milk she took in. In working with Tina, Abbey learned Adalynn was experiencing breastfeeding difficulties from a posterior tongue-tie. A tongue-tie, also called ankyloglossia, is fairly common, affecting about 5% of newborns. A tongue-tie is more common in boys and frequently runs in families.

With a tongue-tie, the frenulum (stringlike tissue that attaches the tongue to the floor of the mouth) is tight, short or thick and can impede the tongue’s movement. The tongue can be  prevented from sticking out past the gums, look heart-shaped, or have difficulty  lifting up to the hard palate. A tongue-tie can pose issues for breastfeeding, because a baby may not be able to open their mouth wide or extend the tongue enough to adequately cup the breast tissue. Also, the tongue’s tightness may keep the baby from doing the necessary movement required to create a vacuum for removal of milk from the breast.

“In December, we got her tongue clipped. I remember the doctor telling me, ‘You might not notice a difference right away; it sometimes it takes a few weeks to see a difference because they’re not used to it, they have to exercise it,’” Abbey said. “At first, I didn’t notice a difference, except she kept making this clicking sound even more because she didn’t know what to do with her tongue. But soon after, she was a completely different baby, just amazing at nursing.”

“She showed me exercises that I can do to help [Adalynn] figure out what to do with her tongue,” Abbey said. “And I mentioned to her that I wanted to wean off of the pump. So we talked and she told me to just cut out one pumping session at a time and go longer periods between pumping. I did that, and it took me two months to completely wean off of the pump, where I was exclusively nursing. And I got to donate 3,000 ounces that I had stored that [Adalynn] didn’t use. I was able to finally exclusively nurse without the pump, and her tongue-tie was fixed.”

While weaning off of the pump, Abbey needed extra support as she became concerned about a suspected clogged milk duct or mastitis.

“I got my first clogged duct, and I woke up at four o’clock in the morning with it, and I was freaking out thinking it was mastitis,” Abbey said. “I called my OB/GYN office’s after-hours line and I spoke to Regina Mash APRN, CNM, certified nurse midwife with Advocates for Women’s Health] for 15 or 20 minutes. She suggested that I try gravity nursing, where you kind of go over top of [the baby] and let her do it. And the clogged duct was gone within 30 minutes. I remember I talked to Tina pretty late one night because I thought that I was getting a fever or a clogged duct at one point. You can call in the middle of the night and talk to somebody if you need to, which is an amazing comfort.”

For other mothers, Abbey suggests finding out what your OB/GYN’s office offers in terms of lactation consulting.

“It was a support system for me,” Abbey said. “Everyone’s different, and some people have issues and others don’t. Know what resources there are to help you, so that if you need that help in the middle of the night, you can get it.”

Adalynn is approaching her second birthday, and according to her mother is very independent.

“She started crawling at 5 months old, and ever since then when she learned she could do things herself, she just goes,” Abbey said. “She won’t touch a bottle, so I think weaning her might pose a challenge. I’m definitely not complaining; it’s what I wanted.”

Advocates for Women's Health, a Part of Norton Women's Care

Advocates for Women's Health, a Part of Norton Women's Care