Though cancer took him, a young man left enduring life lessons for so many 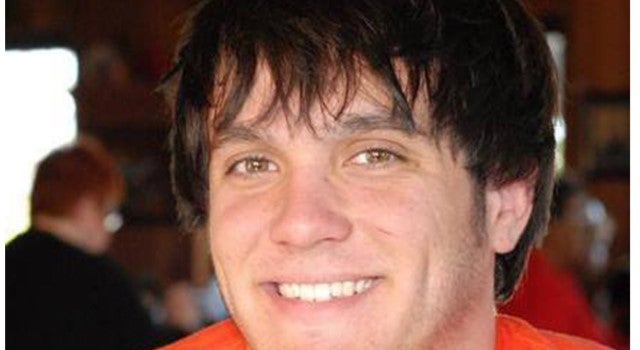 On Sept. 15, Give Local Louisville day, we shared 24 Hours of Courage on Facebook — a day highlighting the stories of courageous mothers, sons, husbands and friends who have fought or are currently fighting one of the most tragic diseases of our time — cancer.

We’re now turning these stories of courage into tales of triumph that need to be heard.

We are honored to share Steven Vanover’s story again with you, as told by his loved ones.

One of Steven’s nurses:

As caregivers, we all run into the occasional heartbreaking story. It does not matter if you work in the emergency department, the mother-baby unit, critical care or surgery. As an oncology nurse myself, I believe this can be one of the most rewarding areas to work in and one of the most heartbreaking. If you work in an area that rarely sees a patient twice, you may not understand how that can happen. But it can.

Born in April 1990 and diagnosed in December 2013 with a cancer that would eventually take his life, a wonderful man named Steven touched the lives of many in our hospital, and we made this place a home to him. From the time of his diagnosis at age 23, Steven spent 136 days in this hospital, including 16 total admissions, and he moved with the oncology unit four times. 185 different caregivers charted on him, including physical therapists, physicians, nurses, PCAs, behavioral health therapists, chaplains and music therapists.

We shared in his life, his engagement to his beautiful fiancé, and even discharged him on Christmas Eve to give him a holiday — only to re-admit him in January.

This nursing staff on this unit knew his diagnosis was grave, but maintained belief throughout his 12 admissions for chemotherapy (and three for sepsis) that he could endure. When he did not feel that he could go on and take the next chemotherapy treatment, one of his nurses gave him a good talking to. He later laughed that she had a way of keeping him going.

In his final days, hospital policy called for him to be moved to ICU, but the nurses knew that he needed to stay where he was familiar, so they advocated for him to stay on their unit. Steven passed away on March 12, 2015. His family, including the staff, shared in his last moments. His final discharge summary by his oncologist was brief and eloquent and at the bottom stated:

Discharge status: Free of all pain and suffering

Discharge medications: None will ever be needed again

Discharge activity: Free to move about with his heavenly father

There are several phrases that say, “When a cardinal bird appears, an angel is near.” Or that a cardinal is a sign that love never dies, or a sign of a past loved one. Well, Steven was a huge University of Louisville fan, so the cardinal connection just makes sense for him. And the timing of when I see cardinals has just been unreal. It comes right when I need to see one.

Ten days after Steven had passed away, I was on the phone with Norton trying to figure out some stuff. His MyChart account had been wiped out because when someone passes away, that’s what happens. But I didn’t know that. I had tried to log on and I couldn’t, and it was just the finality of everything all at once. I was just sobbing. So I called to see if I could pull this stuff up again — I don’t even know why I wanted to read the reports again, but it was just comforting to know that I could if I needed to. But I couldn’t, so I was just sitting there, sobbing, and I look out the window and right outside there was a cardinal bird just sitting there. When I saw that it was like Steven was letting me know, “Take a deep breath, Mom. It’s going to be OK.”

Steven would do my homework for me, and now that I’m graduated I guess that’s OK to say. He would complete some of my online Spanish assignments in exchange for a foot massage or a back scratch. His hands and feet ached a lot so I would take care of that. He never took Spanish or anything, but he was smarter than me so he would be able to figure it out. He would be lying in a hospital bed doing my work, but he would stop solving the problems or typing if I stopped massaging. It was great. I ended up doing really well in the class! But when we found out there was nothing else we could do for Steven’s cancer, I stopped going to class. We were up here for the last two and a half weeks, living up on the hospital floor. There was a community of our friends and family members that stuck around and helped me take care of work and school since I was in my final semester at U of L when he passed away.

The best part of the whole experience was the good care we received. Even toward the end they would give us anything we needed, whether it was a soft drink or a blanket. We constantly slept in the hospital. Mom slept there more than she slept at home. And just their compassion and empathy — it wasn’t just like it was a job for them. They became like part of our family. One time, I’ll never forget, one of his nurses was crying. She was like, “I’m so sorry. I shouldn’t be crying.” But she had become part of our family in the last year. And she had every right to be crying right along with us.

The morning of the funeral, I was getting ready for what I knew would be a tough day, and I heard the doorbell ring. I was caught off guard — I thought, “Who could possibly be at my house the morning of facing the inevitable of burying our Steven?” Two dozen roses were sitting on my porch, and when I saw them and started to read the card hidden inside, I nearly passed out. The note read:

I will always love you.

I was brought to tears as I realized what he had done. Prior to him passing, he told his mom to make sure that she sent me flowers that morning — because that’s the kind of person he was. He wanted me to know that he was still with me, even during the hardest days of my life. I was reminded of the love we shared. He made his love known and he wasn’t even on earth anymore.

He was always leaving me notes. He would stick notes in my purse that would say, “Sorry I kept you up so late talking, but I really enjoyed our talk.” He did the same thing the night he told me he wanted to propose to Lauren. And he wrote the note on the back of a menu. It was dated and I found it in my purse when I got to work. The note said, “Cancer has brought Lauren and me so much closer, Mom. Not everything that comes from cancer is bad.”

Diagnosed with cancer and wondering where to turn?

You don’t have to face cancer alone. And you shouldn’t have to wait for answers.
Call (502) 629-HOPE to schedule a same-day appointment with a cancer specialist.