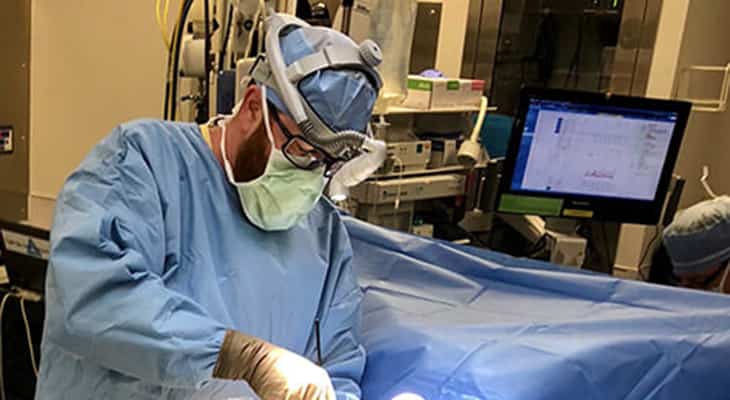 The purchase of the system was made possible with funding from Norton Healthcare and the Children’s Hospital Foundation. The move comes after a successful trial with the robotic technology, led by Jeffrey L. Gum, M.D., orthopedic spine surgeon with Norton Leatherman Spine Center. The system will be used for adults and children needing surgery to correct a variety of spine issues.

Tom Frisby was the region’s first patient to undergo spine surgery with the help of the Mazor X technology, performed by Dr. Gum. Tom, 40, had lived with pain from a herniated disc and arthritis in his lower back for about six years before deciding on spine surgery.

“I was hoping I would be able to find some way to avoid it,” he said. “I’d done chiropractic care, physical care, epidural shots, and none of it was working.”

The pain continued to compound. Tom found himself barely able to walk and struggling to stand for even 30 seconds without being overwhelmed by sharp and burning pain that shot down his leg.

“My leg felt like it was on fire most of the time,” he said. “Fortunately, I sit most of the time at work, but I was at the point where I would basically come home, take a nap, and sit watching television or sit at my computer.”

Tom’s primary care physician referred him to Dr. Gum. At that time, Norton Healthcare recently had acquired the Mazor X system on a trial basis.

“Dr. Gum explained he would do the surgery himself, but the robot would assist where to put the screws,” Tom said.

How the technology works

Robotics technology has been used in hip and knee replacements, but it’s beginning to make its mark in the world of spine surgery. The Mazor X system uses enhanced imaging software and GPS capabilities to help surgeons map out a plan before surgery, increasing the accuracy of screw placement and improving the overall efficiency of the surgery.

“It’s all about the angle in which the screws are placed that helps us reduce muscle stripping,” Dr. Gum said.

Because Mazor X guides the screws, the size of the incision decreases from almost 5 inches to less than 2 inches. This contributes to less pain and a faster recovery.

“We have now performed more than 20 of these surgeries using the robotics technology, and almost all of our patients have left the next day,” Dr. Gum said.

Tom’s surgery consisted of a discectomy and single-level lumbar spine fusion surgery. Dr. Gum removed Tom’s herniated disc and the arthritis that was putting pressure on his spinal nerves, replaced the disc with a cage and bone graft. Dr. Gum then fused together Tom’s L4 and L5 vertebrae so that they would no longer move.

When Tom awoke after surgery, he felt an immediate difference.

“It was actually one of the first things I noticed when I woke up, was that my leg didn’t hurt anymore,” he said. “It was a powerful thing to realize.”

Tom even took a few steps that day. “I remembered standing for a while and enjoying the fact that I could stand without hurting.”

Tom went home the next morning. Within four days, he was off pain medication. One week after surgery, he was able to walk to the end of his street and back. Three weeks after surgery, he crossed a major milestone.

“My wife and I went out, and I walked a mile for the first time in I don’t remember how long — and I was almost in tears, I was so happy about it,” Tom said.

Are you living with back pain?

To make an appointment

Help children in need of specialized care, including spine surgery

“I did not expect him to recover that quickly,” Dr. Gum said. “Part of that is the technique. Even though it is the same surgery, in theory, the technique has changed significantly with the help of the robot.”

Tom now goes on weekly walks and has lost more than 20 pounds since the surgery. He’s living a much healthier lifestyle.

“The world isn’t quite as bleak now,” he said. “My life has been changed.”

His newfound pain-free mobility has allowed him to return to activities he once enjoyed, such as photography. A photo he snapped of a bald eagle hangs in Dr. Gum’s office — a gift from Tom, symbolizing the freedom he says Dr. Gum returned to him.

“How do you thank someone for giving you your life back?” Tom said. “That’s not something you do on a regular basis.”

“This is why I went into a field like this,” Dr. Gum said. “When patients come in with smiles like that and give you gifts like that, it is very touching.”

The Norton Leatherman Spine Center has a long history of specialized care, offering the most advanced treatment for spine conditions and injuries. It was established by Kenton D. Leatherman, M.D., who had a particular interest in exploring new approaches to treating scoliosis.

Today, the center carries on the tradition of excellence in spine care, defining the way modern medicine approaches the treatment of spinal diseases. The center’s surgeons have pioneered many important breakthroughs in spinal treatment that are performed in the U.S. and around the world. Patients from as far away as South America, Southeast Asia and Europe have traveled to Louisville for care at Norton Leatherman Spine Center.