Miraculous recovery leads to giving back

Miraculous recovery leads to giving back 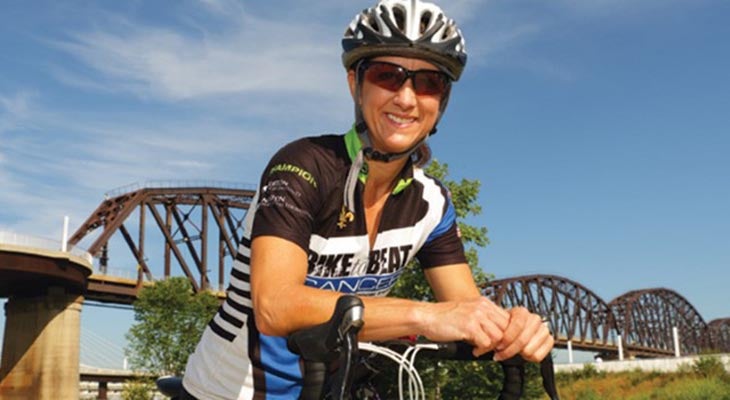 Riding in Norton Cancer Institute’s Bike to Beat Cancer event is physically challenging, but for Tonya Hinton, some might even call it miraculous. In March 2011, a car accident left Hinton with a broken neck and torn spinal cord. Her life hung in the balance, and friends and family feared the worst.

Fast forward to 2016 and Hinton, staffing and payroll coordinator at Norton Children’s Hospital, has participated in numerous mini-marathons and is excited to be riding in her second Bike to Beat Cancer alongside her peers on the children’s hospital’s “Just for Kids” team.

The five years since the accident have not been easy. Once she was out of the hospital, Hinton endured 19 months of physical therapy. She retrained her body to do everything — walk, brush her teeth, write with a pen.

“The spinal cord being torn created a disconnect between my brain and my muscles,” Hinton said. “There was no command for my limbs to work the way they used to.”

As a mother of two, Hinton found she had to get back to life as it was before the accident.

“My children needed me,” she said. “I remember my daughter, who was in kindergarten at the time, visiting me after school in rehab. It was scary for her to see me in this situation. I wanted to hug her and tell her it would be OK, but I couldn’t physically give her a hug. And kindergartners need hugs.”

Recovering from the type of injury Hinton suffered is very rare; she has been told by her surgeon that she is one of only 42 of his patients who has made such a miraculous recovery. She feels she has been given a gift and needs to use it to the best of her ability.

She is able to ride a bike, and she enjoys doing it. That, in turn, allows her to support a dear friend who lost a daughter named Harper to cancer at a young age.

“I can’t imagine going through the loss of a child,” Hinton said. “Harper was a beautiful little girl. Raising money and participating in the ride allows me to help carry on her name.”

This will be Hinton’s second year to ride the Bike to Beat Cancer’s 100-mile course. She raised more money than she expected last year and hopes to do the same this year.

“I have so much love and support surrounding me, and I just can’t thank them enough,” Hinton said.

The Bike to Beat Cancer is Sept. 17, 2016. Visit BikeToBeatCancer.org to support Hinton or other riders, or for more information on how to become a rider or volunteer.