Adult smoking nationwide hits all-time low — but how does Kentucky stack up? 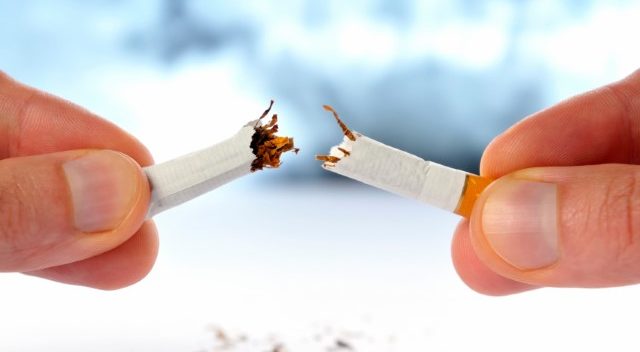 An annual survey done by the Centers for Disease Control and Prevention recently found that 15 percent of adults in the United State smoked in 2015. The CDC hails this rate as an all-time low, and points to a record one-year drop in smoking — down 1.7 percent from 2014 — for helping lower adult smoking almost 10 percent since 1997.

This is great news given that smoking is our nation’s No. 1 cause of preventable disease and premature death.

Yet it hardly signals a last gasp for the dreadful toll smoking takes on people’s health, especially here in Kentucky.

“Lung cancer is the most diagnosed type of cancer in Kentucky, and smoking is a huge risk factor for lung cancer,” said Joseph Flynn, D.O., MPH, executive director and physician-in-chief, Norton Cancer Institute.

At 26.2 percent and 17.9 percent respectively, Kentucky’s adult and youth smoking rates consistently lead the nation. Kentucky’s lung cancer rate tops all other states, which is especially disheartening since more people in the U.S. die from lung cancer than any other type of cancer.

Tobacco use causes more than 480,000 deaths nationwide each year. It is a major risk factor for most forms of cancer as well as heart disease, stroke, chronic lung disease and other life-threatening diseases.

“Smoking is bad news in every way,” Dr. Flynn said. “It’s essentially a toxic mix of poisons that harm nearly every organ in your body.”

About 50 years ago, roughly 42 percent of adults in our nation smoked. It was common to puff away in offices, restaurants and airplanes. Even patients and staff in hospitals and doctors’ offices smoked.

How has such a dramatic shift in smoking behavior occurred in less than the span of one generation? Experts attribute the change to various factors, including the growing understanding of the harmful health effects of smoking.

In a radio interview, CDC director Thomas R. Frieden, M.D., pointed to anti-smoking campaigns, increased tobacco taxes that raise the cost of cigarettes, and policies to restrict smoking in public places for helping to decrease smoking.

“These make a big impact, and there’s an interplay between those kind of specific programs and the general attitude toward smoking … in our society,” he said.

It may take up to 30 years before some diseases caused by smoking show up. So, as fewer people smoke, it will take time to see the full health benefits.

Even so, if ever there were a time to be optimistic about people deciding to “kick their butts goodbye” — this is it.

Are you ready to kick your butts to the curb? We can help. Start here, or by taking a free online lung cancer risk assessment.