Movin’ & groovin’ into the 3rd trimester

Movin’ & groovin’ into the 3rd trimester

As her pregnancy progresses, Brittany B. reflects on exciting events from trimester 2. 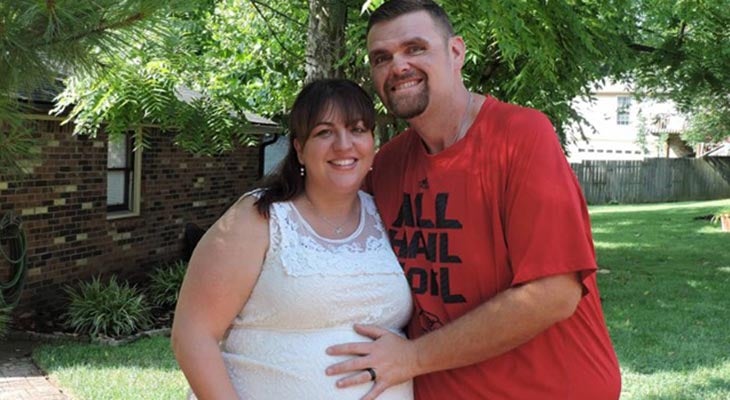 I am now seven months pregnant and Baby B. is pretty cozy, growing and moving. A lot has happened over the past few months of pregnancy, and I’ve finally had time to reflect on it all while growing a human.

During our 14-week ultrasound we got to see Baby B. move! His or her little legs would stretch out every time the ultrasound tech would push down. Sure, Baby B. has been moving for some time, but because he or she was so tiny before, it wasn’t movement that could easily be picked up by ultrasound.

I realize that many expectant mothers do not get to have as many ultrasounds as we will, but if you do get one between your initial prenatal appointment and your anatomy ultrasound around 20 weeks, it’s pretty amazing. Hearing the heartbeat and seeing Baby B. move are always the most exciting parts of my doctor’s appointments.

At 17 weeks we finally decided to reveal to the 3F’s — family, friends and Facebook — that we were expecting.

Before 17 weeks, we had told our parents, siblings and a few very close friends. Following the miscarriage of our first baby we just wanted to be sure our pregnancy was healthy and on track before announcing our little miracle to the world.

Every woman and every pregnancy is different. When you decide to announce your pregnancy is entirely up to you, whether it’s on the first day you find out or waiting until 20 weeks. Announcing your pregnancy should be when and how you are comfortable with.

Since 14 weeks when Baby B. was able to begin to hear sound, we have been playing him or her music at night. At 20 weeks, we discovered that he or she would move toward the sound. We knew Baby B. was moving before then because when my husband would talk to him or her, the hard spot in my abdomen would move. But right around 20 weeks we tried an experiment to see if Baby B. really would move toward the music.

I played music on my phone and set the phone toward the middle of my abdomen for the first two songs, then on the third song I moved the phone to the right. Baby B. moved over to the right. I can only assume his or her movement was to better hear our musical selection. (Louis Armstrong’s “What a Wonderful World,” in case you were wondering. Awww! I know, right?)

I’m not going to lie, that was one of the most amazing experiences! And my husband, who is a musician, was thrilled that Baby B. really does like music.

At 21 weeks I was finally sure I was feeling Baby B. move. I thought I had been feeling him or her move a week or two before, but this time I was certain. Even my husband felt Baby B. move one night when I was just over 21 weeks. During the last few weeks of my second trimester, Baby B. definitely became a regular wiggle worm!

Being able to feel Baby B. move — and not just notice that the hard spot in my abdomen moved — was a great relief mixed with extreme excitement to know Baby B. is continuing to move and grow.

I’ve heard and read that the second trimester is sometimes considered the least exciting of the pregnancy, but for me I don’t think that was true.

During the second trimester, we finally announced our pregnancy to the “world,” we started shopping for and decorating the nursery, I felt Baby B.’s first movement, we had two ultrasounds where we got to see Baby B. move, and we found out if Baby B. is a he or a she. Some of that may not be exciting for all moms, but it’s all been very exciting to me!

If you’re a first-time mom like me, you probably find every week of your pregnancy brings something new and exciting, no matter how small. Take time to reflect on what your body is actually doing — growing a human being! That is no easy task and nothing short of a miracle. Cherish the newness and the surprises. We are!