My family’s journey with ovarian cancer

My family’s journey with ovarian cancer

How ovarian cancer has haunted a local family for 30 years 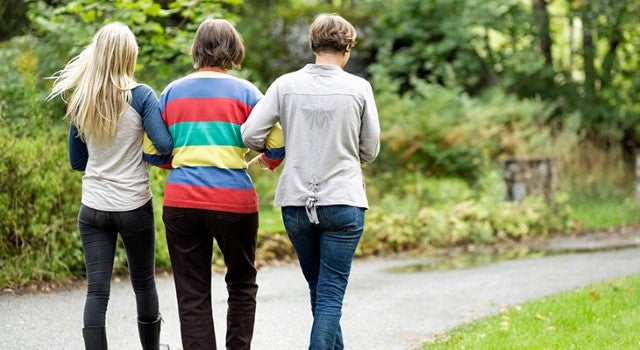 My grandmother. My mother. Both had ovarian cancer. Both were diagnosed at age 54. My mom was diagnosed first with breast cancer, then ovarian cancer a very short six years later.

Ovarian cancer has haunted my family for 30 years. My grandmother died rather quickly from the disease. She died when I was 8.

My memories of her have faded, but two stick out— her wigs and wig stand in her bedroom, and how sick the drugs and cancer made her.

Once my mom finished her breast cancer treatment, we thought the “cancer curse” was behind us.  However, over the course of several months, she began to feel sick.

Her symptoms were lower abdominal pain, which she thought might be her gallbladder, and “menstrual” bleeding, even though she was menopausal. She was very quickly diagnosed with stage 3 ovarian cancer.

For the last four years, she has gone through three surgeries, an experimental drug trial, and soon she’ll start her fourth type of chemotherapy.

After the initial ovarian cancer diagnosis, my mom was finally genetically tested. And there it was: BRCA2. A hereditary mutation in one of her genes that increases the risk for breast and ovarian cancer.

My mom, and grandmother, are one of 11 to 17 percent of women who carry BRCA2 and develop ovarian cancer. Out of my mother’s three sisters and three female cousins, one of her cousins also has the BRCA2 mutation.

Since my mother’s cousin chose to be tested, they recommended a full hysterectomy and double mastectomy to greatly lower her chances of having breast or ovarian cancer.

My mom’s story is the story of many women. She has met so many women affected by ovarian cancer from all walks of life. It does not discriminate. It is an ugly, ugly disease.

My mom’s super power is “does cancer really well.” But her super power does not make her a hero. She is hero because of her courage, strength and grace in the midst of adversity.

What can you do to raise awareness about ovarian cancer?