Neurologist has been caring for multiple sclerosis community for four decades

Neurologist has been caring for multiple sclerosis community for four decades 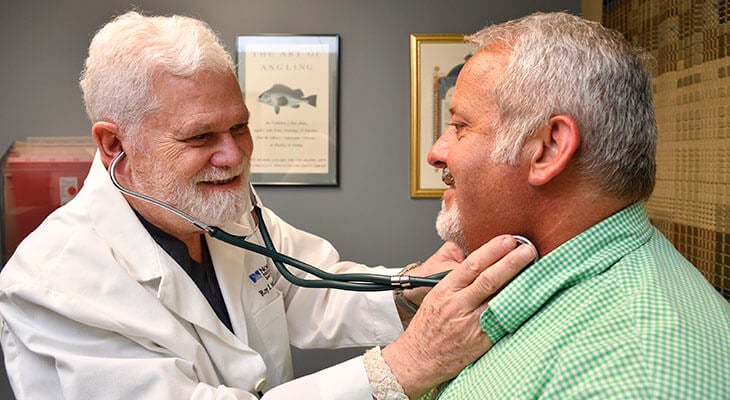 After five decades of caring for patients in the River City, Roy Meckler, M.D., has been dubbed Louisville’s “godfather of neurology.”

Dr. Meckler specializes in treating multiple sclerosis (MS), a degenerative neurological disease. He no longer sees new patients but is fiercely loyal to the patients he has, some of whom have been in his care for more than 40 years.

“I’ve been a neurologist for a long time. A lot of my patients are like family to me,” Dr. Meckler said. “We deal with a lot of chronic illnesses for which there are no cures. We provide comfort and support, and hopefully some degree of optimism for improvements in quality of life.”

As the son of Russian immigrants, Dr. Meckler grew up in Cleveland, Ohio, eating different cultural dishes, an upbringing he said made him receptive to new foods. That means trying new restaurants in Louisville.

“I’m just open to anything. I tend to like ethnic foods,” he said. “I like Vietnamese food a lot. I like good Chinese, Japanese. There are lots of good restaurants in Louisville.”

Dr. Meckler also likes fly fishing out West. He and his wife, Lynn, have fished in Montana, Wyoming, Oregon, Utah, Colorado and California.

Dr. Meckler said he relishes the pure air and the time spent out in nature: “The centered feeling that you get walking a stream, being connected to the natural world.”

There’s something else about trout fishing he appreciates.

“The humility you achieve knowing a creature with a brain the size of a walnut is smarter than you,” Dr. Meckler quipped.

Lynn Meckler worked as a clinical psychologist before going back to school to become an art historian. Going places with her is like traveling with a tour guide, according to Dr. Meckler. Wherever they go, she tells him about the history, architecture, music and, of course, the art.

In addition to food and travel, Dr. Meckler coached judo for more than 30 years. He also did judo himself until injuries forced him to give it up. His teams were state champions 12 times, and two of his students became Amateur Athletic Union Junior Olympic state champions.

Dr. Meckler attended Case Western Reserve University School of Medicine in Cleveland, where he also completed his residency in neurology.

After a stint in the Army stationed at Fort Knox, Kentucky, Dr. Meckler became a Harvard fellow, completing a fellowship in neuropathology at Massachusetts General Hospital, Boston, before coming to Louisville in 1974.

Dr. Meckler was co-founder and medical co-director of The MS Center, now known as Norton Neuroscience Institute Resource Center. At the time, there were no treatments for MS. Since 1993, researchers have made enormous strides in understanding and treating MS.

“We now have 16 disease-modifying therapies,” Dr. Meckler said. “Although we don’t have a cure, we do have drugs that almost achieve disease-free intervals. So we can do quite a bit.”

In addition to caring for MS patients, he said it’s important to support caregivers and family members, because the disease affects everyone around the patient.

The National Multiple Sclerosis Society recognized this commitment by naming the Norton Neuroscience Institute Resource Center and Norton Neurology Services as a Center for Comprehensive Care in MS.

Dr. Meckler also has received the recognition of his peers, named a Louisville Magazine “Top Doc” since its initial publication. He is a fellow of the American Academy of Neurology and the North American Neuro-Ophthalmology Society.

Dr. Meckler has scaled down his workload from 16- to 18-hour days, but still puts in 50 hours a week seeing patients, answering calls and doing paperwork. He’s not ready to retire.

“I still like caring for patients, and I like the intellectual challenge of keeping up with a complex disease,” he said. “I just keep going.”