A before-death diagnosis of CTE, a dementia-like disease caused by head trauma, could bring us closer to learning more about the disease. 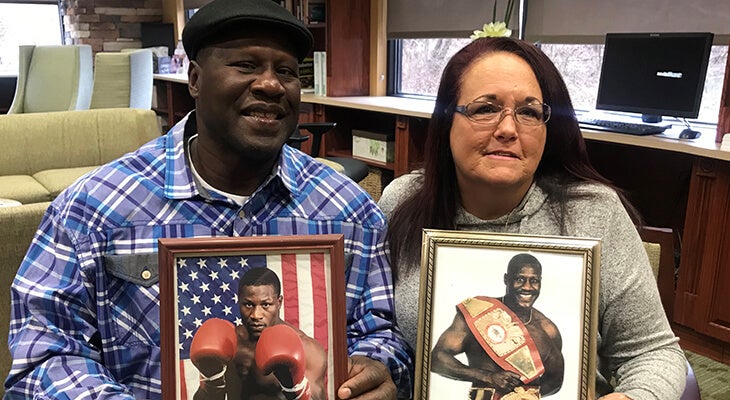 James Pritchard vividly remembers his professional boxing career, down to details of almost every match. And there were dozens upon dozens of matches.

“This is me back in the ‘80s. I was young then,” James, 56, said as he flipped through photos of himself in the boxing ring.

Though his speech is slurred, he can tell you what happened back then. But he struggles to remember conversations he had with his wife just hours ago.

“The short-term memory is a difficult situation. I just totally go blank,” James said. “I feel like a zombie now.”

Hundreds of blows to the head

His wife, Linda Pritchard, points to a photo: “That’s him throwing a punch.”

Reaching for another, she said, “And this is one where he’s getting hit.”

Linda met James not long before he retired in 1997. When they met, she noticed something wasn’t quite right.

“He came up and introduced himself as James Pritchard and I could barely understand him then,” Linda said.

She was the driving force behind his retirement.

Boxing was James’ livelihood. He was good at it, passionate about it and had several people rallying for him to continue with it despite signs of his speech and body slowing.

“They just wanted to keep going for a goal of money, but I knew something was going on and that it had to do with him getting hit in the head — 12 rounds of getting a blow to your head for three minutes at a time.” she said, referring to the length of a typical match.

In search of answers

Not long after they met, Linda became James’ health advocate. She set out on a journey for answers and hit roadblocks.

“The doctors would keep saying it’s just a pinched nerve in his neck and so on and so forth,” she said. “Nobody really connected it to his head.”

More than a decade later, Linda and James met Tad Seifert, M.D., neurologist and director of Norton Healthcare’s Sports Neurology Program. It seemed serendipitous that he also happened to be the chair of the Kentucky Boxing & Wrestling Commission’s Medical Advisory Panel.

“You tend to see it in individuals with some type of significant history of head trauma,” Dr. Seifert said.

CTE is a dementia-like disease that can cause headache, memory loss, mood swings, changes in gait or balance, and changes in speech patterns — many of the symptoms James has experienced.

James likely has CTE, a condition that was unheard of in his boxing days.

The disease first came to light in 2002 after its discovery by neuropathologist Bennet Omalu, M.D. While working at the Allegheny County Coroner’s Office in Pittsburgh, Pennsylvania, Dr. Omalu performed an autopsy on former Pittsburgh Steelers player Mike Webster.

He noticed strange patterns of tau protein deposits in the brain — a protein that is not supposed to be in the brain but builds up over damaged brain cells, killing them. This discovery began to change the face of high-impact sports.

The signature CTE protein can be identified only after death through a brain autopsy. However, researchers in Chicago identified tau protein in the brain of a living NFL player in 2012 with the help of a new experimental brain scan. When the patient recently died, researchers confirmed their findings.

“If science evolves to the point where we can diagnose CTE in the living, we’ll finally begin to have objective means to measure whether our clinical interventions are actually providing some benefit in the treatment of the disease,” Dr. Seifert said.

Research surrounding the special tau-identifying technology continues. The discovery brings us steps closer to preventive and treatment options for CTE.

“We would be able to identify athletes who have CTE in the early stages or potentially even identify those who are at high risk but not yet affected,” Dr. Seifert said.

He explained that a diagnosis would likely lead to new standards, such as removing athletes with CTE from the sport in hopes of slowing progression of the disease.

“But, again, a lot of this is still poorly understood from a scientific standpoint,” Dr. Seifert said. “It’s not yet known if we can reverse the disease state by removing athletes from the setting.”

Dr. Seifert hopes further research, with the help of a CTE diagnosis before death, will lead to more insight about treatment options.

As for Dr. Seifert’s patients who he suspects have CTE, unquestionable neurologic damage has been done. A definitive CTE diagnosis wouldn’t change James’ outcome, but it would give him comfort.

“It would open my eyes to what is really happening to my brain and help understand what I need to make me comfortable,” James said.

Due to the limited availability of the clinical trial using the special brain scan, many patients like James do not yet have access to this science. More research is needed before the technology is widely offered to patients suspected of having CTE.

For now, Dr. Seifert has prescribed James various medications as well as cognitive therapy in an effort to improve his symptoms. James and Linda said the interventions are making a tremendous impact.

“He has come a long way and that has got to do with Dr. Seifert. He is a really good doctor. I love him to death,” Linda said. “People who have known James for years say, ‘Oh my gosh, he is so much better!’