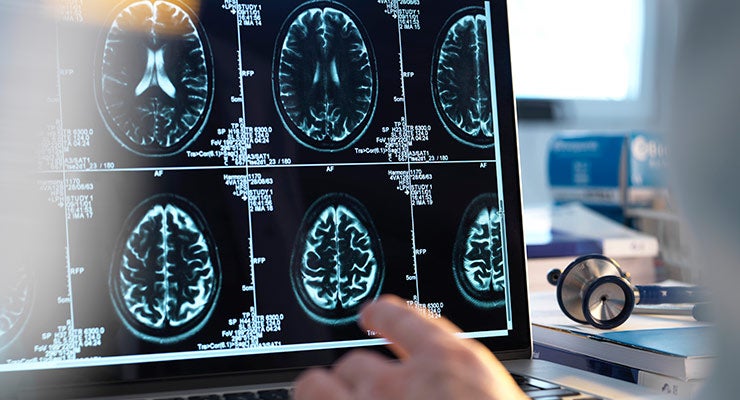 Abigail J. Rao, M.D., neurosurgeon with Norton Neuroscience Institute, isn’t an electrician, but she knows how electricity impacts the brain. She’s using electricity to make a world of difference for individuals diagnosed with movement disorders.

“Deep brain stimulation won’t cure the disorder, but it may help lessen symptoms,” Dr. Rao said. “In many cases, it allows people to reduce their medications and improve their quality of life.”

The deep brain stimulation system consists of several components. An electrode is implanted in the targeted area of the brain. Then, an insulated wire is passed under the skin of the head, neck and shoulder, and is connected to a battery implanted near the collarbone.

Once connected and turned on, the system delivers a constant stimulus, or electrical impulse, to the tip of the electrode implanted in the brain. This stimulus interrupts the abnormal circuit in the brain causing the movement disorder. By overriding the abnormal impulses, DBS can help reduce tremors, slowness, stiffness and walking issues.

Dr. Rao uses a newer DBS surgery technique in which the patient, instead of being awake, is fully anesthetized. In fact, she performed Louisville’s first “asleep” DBS surgery on a patient with Parkinson’s disease in late 2018.

Dr. Rao said this method has many benefits, including being more comfortable for patients who aren’t comfortable with the idea of being awake during brain surgery.

“Initially surgeons would put the millimeter-sized electrode in the brain and have patients perform movements. Then, they could move the electrode or change the stimulation if they had unintended results, such as numbness in an arm,” Dr. Rao said. “But advancements in technology map the brain in three dimensions, which allows for accurate targeting. This means patients can comfortably sleep through the procedure.”

The technique also can mean a quicker and safer operation, with a lower risk of bleeding.

The concept of using electrical current inside the brain has been around for several decades, mostly for movement disorders. Now it’s at least an experimental treatment for conditions such as hypertension (high blood pressure), depression, obsessive-compulsive disorder, chronic pain and dementia, such as that seen in Alzheimer’s disease.

“DBS could have many additional applications in the near future,” Dr. Rao said. “It’s very exciting technology.”

It’s also exciting for her patients.

“I tell my patients it’s not a cure, but it can be transformative for people who say, ‘I can go out with my friends; I can brush my teeth,’” she said. “For them, life is a lot better.”