By temporarily creating a space between the rectum and the prostate, radiation oncologists can perform fewer treatments with higher radiation doses. 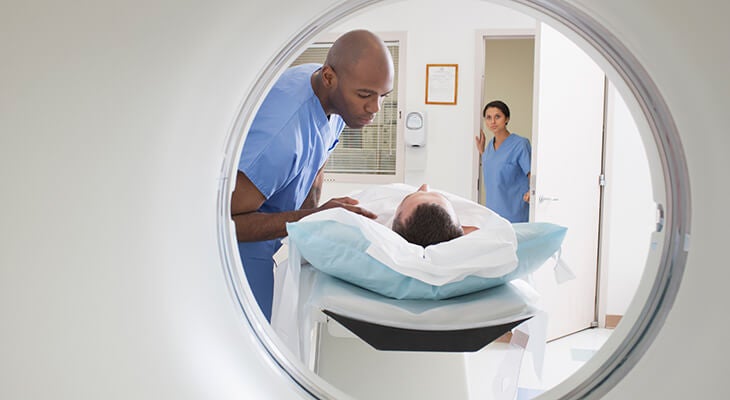 For the more than 60,000 men each year whose prostate cancer is treated with radiation therapy, the close quarters around the prostate and rectum meant that prostate radiation treatments used to be delivered more frequently with lower doses.

A new technique being used at Norton Cancer Institute is making it possible for more men to have fewer, but higher-powered, radiation treatments.

The prostate rests directly in front of the rectum, presenting a small risk of unintended damage to the rectum during radiation therapy. To reduce the risk, radiation oncologists traditionally administered a nine-week course of 44 treatments with a lower daily dose of radiation to the prostate.

The new technique allows for a shorter course of treatment with higher doses — by temporarily creating a buffer area between the prostate and the rectum.

SpaceOAR Hydrogel is injected as a liquid that expands between the prostate and rectum, creating a soft but firm buffer within 10 seconds.

The injection of SpaceOAR Hydrogel creates the space by moving the rectal wall farther from the prostate and reducing the risk that the radiation will damage healthy rectal tissue. Multiple major studies found men who underwent radiation therapy without SpaceOAR Hydrogel were eight times more likely to experience a decline in bowel, urinary and sexual function.

The gel remains in place during treatment. After about six months it liquifies, and the body flushes it through urine. SpaceOAR is also beneficial for prostate cancer patients with conditions such as irritable bowel syndrome or Crohn’s disease and who are more sensitive to radiation.

SpaceOAR Hydrogel can be useful for all patients undergoing prostate radiation therapy who want to reduce rectal side effects, but he requires the procedure to be performed with stereotactic body radiation therapy (SBRT) — high-dose 3D radiation delivered with pinpoint accuracy.

SpaceOAR Hydrogel is ideal for patients who are concerned of rectal side effects and want to minimize the chance of these side effects, or those who are candidates for SBRT.