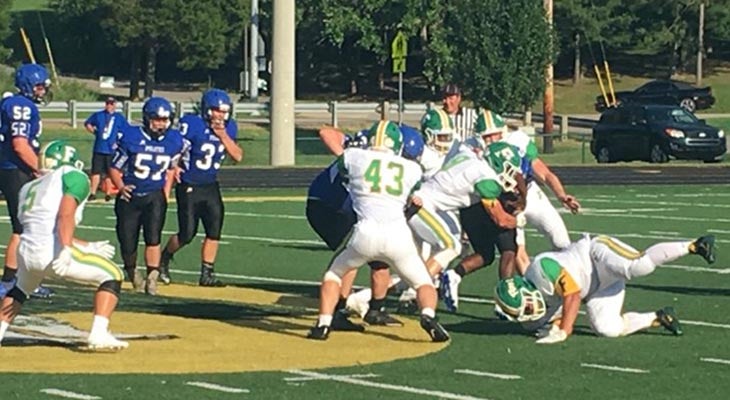 “It was the first day of practice,” Hickman said. “I jumped at the line of scrimmage, was hit and landed on my head. After that, everything became disoriented.”

A trip to the hospital ensued. He was diagnosed with a concussion.

“The first couple weeks, I felt awful,” the now senior said. “I was dizzy all the time. I couldn’t run, lift — anything.”

Concussions continue to be a problem among athletes in all types of contact sports. And while concussions aren’t 100 percent preventable, Norton Healthcare is helping thousands of local high school athletes stay in the game.

Thanks to a $120,000 grant, Norton Sports Health helped New Albany and Floyd Central high schools in Southern Indiana purchase more than 200 new football helmets. The helmets, with a safety rating among the highest available, are replacing older helmets that don’t offer the same level of protection.

According to Hickman, who is now healthy and starting for the Highlanders this season, the helmets are drawing rave reviews.

“We love the new helmets,” he said. “Not only are they more comfortable, they offer great protection. The guys and I didn’t have any headaches after the first week of hitting practice, which has always happened in the past.”

The grant also is paying for baseline concussion testing for players involved in contact sports. Players at both schools take the test before the season to gauge normal brain function. When a player has a suspected concussion, the schools’ athletic trainers, whose salaries Norton Healthcare also helps fund, retest the athletes to make sure they can safely return to the field.

“The extra protection will allow us to play more comfortable and confident, both of which will help us go after the state title,” he said. “Plus, when you look good, you play good. It’s going to be a great season.”

Norton Healthcare has a similar partnership with Jefferson County Public Schools in Louisville. Last year, a grant was used to replace nearly 250 helmets with higher-rated models, as well as begin baseline testing. It also provided partial funding for athletic trainers at a dozen JCPS high schools.