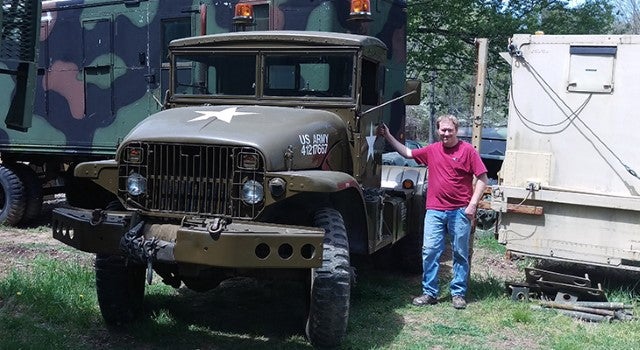 When Matthew Stone was 3, he had surgery at the children’s hospital to repair two holes in his heart and remove his pulmonary valve — both known as congenital heart defects. For 31 years he had no issues and simply saw his physicians for check-in visits. But that began to change.

“Early this year, I did a stress test,” Stone, now 33, said. “I did pretty good, but toward the end I was definitely feeling the effects of not having a valve.”

That and one side of Stone’s heart was enlarged. Without the pulmonary valve, blood had begun to flow back into the right ventricle of his heart instead of out to the body.

“Many times we see patients who have had surgery in the past that can eventually cause this backflow,” said Edward Kim, M.D., pediatric cardiologist and medical director of Cardiac Catheterization Services at the children’s hospital heart center and University of Louisville Physicians. “Over time, this can enlarge the right side of the heart and cause heart failure with activity limitations.”

Stone was starting to see the effects, getting tired just walking up a hill on the way to his parents’ house.

Nearly one in 10 births, or nearly 1 percent of all babies born in the United States, has congenital heart disease, according to the Adult Congenital Heart Association. This translates into more than 550 babies a year in Kentucky (Centers for Disease Control and Prevention reports 56,170 births for Kentucky). About one-quarter of these children have what is considered critical heart disease that will require either catheter-based or surgical intervention within the first year of life. These defects may involve the heart valves, cardiac chambers, blood vessels in or around the heart and lungs, the heart muscle itself or cardiac rhythm. Any of these may be quite serious if not properly addressed by a pediatric heart specialist.

As advancements in treatments continue to be made, more adults, like Stone, are living with these defects — an estimated 1.3 million in the United States alone.

To get Stone’s heart working properly, he would need a new valve.

“Originally the plan was to do open heart surgery and I’d be out for two to three months,” Stone said. “That’s one reason I waited so long — I didn’t want to do all that.”

But now patients have a new, less invasive option: the Sapien valve.

The Sapien valve can be implanted through a minimally invasive procedure in the hospital’s cardiac catheterization lab. It usually requires only an overnight stay in the hospital.

It also means most patients do not need maintenance medications, such as blood thinners.

And, less than two weeks after his procedure, Stone was back to normal.

“I was back to work in less than a week,” he said. “I collect Army trucks and can climb up in them with no problem. Before, it was a little more difficult.”

And that walk to his parents’ house?

“The week after my procedure, I did the same walk and it was no problem at all,” he said. “I’ve noticed that my thoughts are clearer and I’m quicker with answers. I definitely feel the relief and can tell everything’s working better.”

About the heart center

About one-quarter of children born with congenital heart disease (CHD) have what is considered critical congenital heart disease that will require either catheter-based or surgical intervention within the first year of life. These defects may involve the heart valves, cardiac chambers, blood vessels in or around the heart and lungs, the heart muscle itself or cardiac rhythm. Any of these may be quite serious if not properly addressed by a pediatric heart specialist.

The children’s hospital, working with specialists from U of L Physicians, is home to the heart center, which provides comprehensive services for patients of all ages born with CHD and for children with acquired heart conditions. It also is the only full-service adult congenital heart disease program in the commonwealth of Kentucky and the only pediatric heart failure and transplant program.

For more information about the heart center, call (502) 629-KIDS. Or, support these critical services by making a donation to the Jennifer Lawrence Heart Center Challenge.