A New York City resident, Brian Haskel was in the city when hijacked planes crashed into the twin towers of the World Trade Center. He watched them collapse from his home. 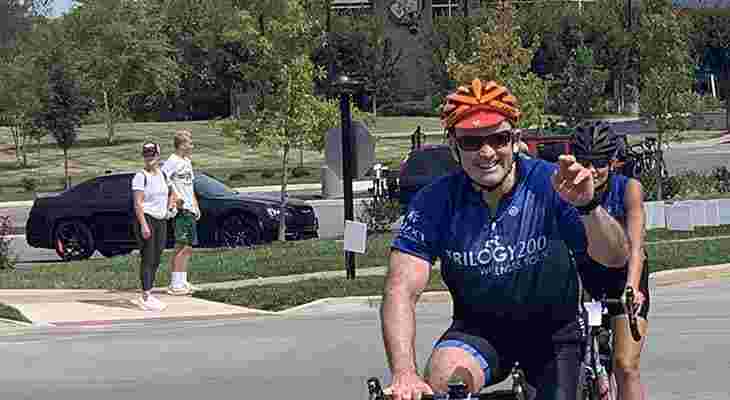 Brian Haskel is preparing for his eighth Bike to Beat Cancer ride. Each year, he rides in honor of loved ones touched by cancer.

“I lost many relatives to cancer who were taken too young,” Brian said. “Great people who left holes in my family that can never be filled, and we still mourn for them.”

As this year’s event falls on Sept. 11, he also will reflect on the lives taken too soon on that tragic day in 2001.

A New York City resident, Brian was in the city when hijacked planes crashed into the twin towers of the World Trade Center. He watched them collapse from his home.

“Our home is maybe a mile from the towers,” Brian said. “I stepped outside and watched the towers just disappear into a cloud of dust.”

He still remembers the smell of the air.

“It was very disturbing — it burned for months,” he said.

Brian often thinks about the tragedy that hit so close to home.

“Especially around this time of year when I can see from my home two blue light beams glowing in the distance near where the Twin Towers once stood—a tribute to the lives lost,” Brian said.

Make an impact for Norton Cancer Institute through Bike to Beat Cancer; consider riding or volunteering.

“I feel like my participation in Bike to Beat Cancer makes such a difference in the lives of many, by supporting research to find a cure and better treatments for people who are afflicted with cancer,” Brian said.

Brian rides with Team Trilogy. His team has raised more than $500 thousand over the years through Bike to Beat Cancer. The funds help support Norton Cancer Institute, which directly impacts patients, leading to lifesaving research, treatments and more.

Brian, an attorney at the law firm of Sills Cummis & Gross, with clients in Louisville, first was introduced to the event by a client who encouraged him to participate.

“The next thing I knew, I was on a plane to Louisville to participate in my first ride,” Brian said. “I did not realize it at the time, but it was a life-changing event — that feeling of pride, fellowship and commitment.”

This year, Brian will ride 65 miles. Help support his cause — make a donation.