Break-through drug brings hope for patients prone to relapse, resistance to other therapies 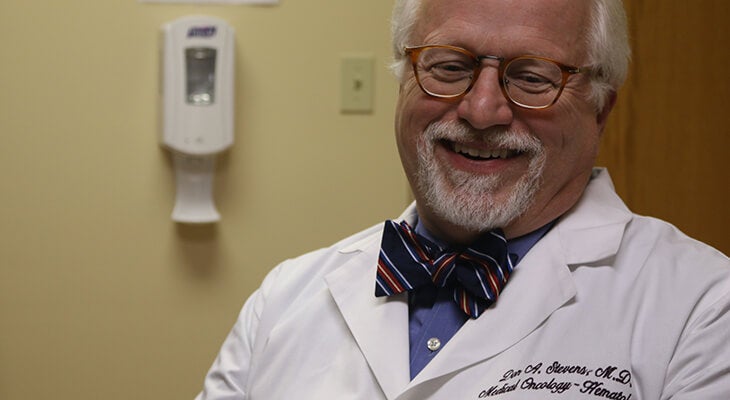 The U.S. Food and Drug Administration recently approved a new cancer drug that has been available only to patients enrolled by a Norton Cancer Institute physician and one other researcher nationwide.

Don A. Stevens, M.D., medical oncologist/hematologist and director of the Hematologic Malignancy Program at Norton Cancer Institute, was one of only two physicians in the country able to enroll patients in a national clinical trial to study the new medication.

The FDA granted accelerated approval of Aliqopa (copanlisib) on Sept. 18, 2017, to Bayer Healthcare Pharmaceuticals. Aliqopa is for patients who have received at least two prior rounds of treatment for follicular lymphoma, a slow growing, non-Hodgkin lymphoma.

According to Dr. Stevens,  follicular lymphoma often comes back even after multiple treatments. When this happens, treatment options are limited since patients tend to develop a resistance to previously used therapies. The new drug gives patients another chance.

“While there is some potential to recycle previously used drugs, most are less effective in subsequent courses of treatment,” Dr. Stevens said. “These patients have no cure at this point, so novel compounds like Aliqopa that offer a safe alternative are obviously good news.”

Norton Cancer Institute maintains a robust research program to give patients access to leading-edge therapies. This clinical trial (known as CHRONOS-1) included 104 patients with follicular B-cell non-Hodgkin lymphoma who had relapsed following at least two prior cycles of treatment.

Brenda Montgomery, a patient of Dr. Stevens from Carrollton, Kentucky, enrolled in the trial in February 2016. Active and healthy throughout her life, Montgomery never expected a routine checkup to lead to a nine-year battle with follicular lymphoma. She also never guessed she would be left with few treatment options after a relapse following her first- and second-line treatments.

Norton Cancer institute is committed to providing our community and region with the best possible options to fight cancer.

“Aliqopa has given me new hope,” Montgomery said. “After nine years and several relapses, I’m still here, running my own business and enjoying life.”

The trial measured how many patients experienced complete or partial shrinkage of their tumors after treatment with copanlisib injections. Results showed 59 percent of patients had a complete or partial response. On average, the response continued for more than one year.

“The results of this clinical trial were very positive,” Dr. Stevens said. “Nearly 60 percent of patients who participated saw significant shrinkage of their lymphoma as measured by CT scans.”

Montgomery beams when she talks about her results: “My last scan showed I’m cancer-free at this point!”

Aliqopa received accelerated approval from the FDA because it filled an unmet medical need for a serious condition. Further clinical trials are required to confirm Aliqopa’s clinical benefit. As the trial sponsor, Bayer currently is conducting these studies.

According to Dr. Stevens, most of these side effects proved to be temporary or manageable.

Other potential serious side effects can include infections, inflammation of the lung tissue (noninfectious pneumonitis) and severe skin reactions. Women who are pregnant or breastfeeding should not take Aliqopa because it may cause harm to a developing fetus or newborn baby.