Several members of the team surprised Jeremiah in his hospital room with a shirt signed by the entire team, a game program, a 45-minute visit and a vow to win the game with Western Kentucky University. 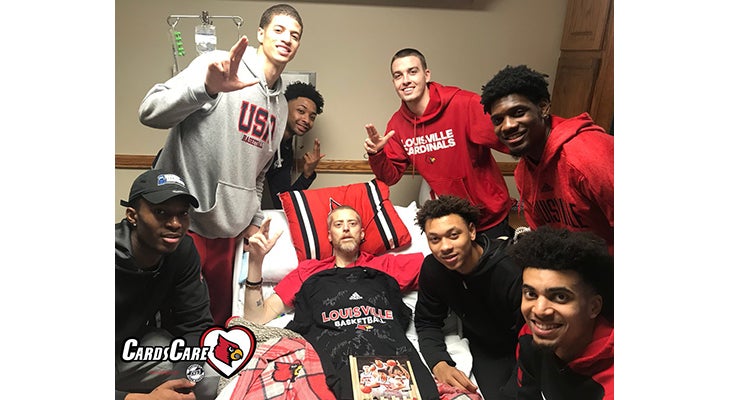 Jeremiah Howe’s last wish was to go to Louisville Cardinals basketball game. With advanced cancer, he needed to remain in the hospital for care. But the nursing team at Norton Hospital started working their contacts to get him something very special.

Several members of the team surprised Jeremiah in his hospital room with a shirt signed by the entire team, a game program, a 45-minute visit and a vow to win the game with Western Kentucky University for him.

Of course, the Cardinals won and catapulted into the No. 1 ranking.

“The best party I ever had,” Jeremiah said through happy tears in his hospital bed. “I didn’t expect it at all. It meant a lot.”

The nursing staff told Jeremiah they were planning a party for him — not for any particular reason, but just because “we do a lot of parties around here,” said Erika Roarx, R.N. in the Norton Hospital oncology unit.

Shelby Keeling, R.N., also in the oncology unit, emailed everyone she could think of and finally got it touch with Kamari Wooten, director of academic services for the Louisville men’s basketball team. He arranged for seven members of the team to visit.

When the time came, the players streamed into his hospital room. Jeremiah was beside himself. He cried, the nurses cried, everyone cried.

They crowded around his bed, talked basketball and visited. Jeremiah has strength for one short walk each day and he used that energy to walk the athletes to the elevator when it was time to go.

The team later shared a picture on social media, adding: “Went to see one of our biggest fans on our day off yesterday. TTU, Jeremiah,” using shorthand for “two thumbs up.”

Jeremiah, 38, wore an ailing Cardinal bird on the front of his shirt as he told his story. His voice was little more than a whisper as he alternated between laughter, gentle teasing and the occasional tear.

Jeremiah has been a Louisville fan as long as he can remember. After the 1986 NCAA championship, his mother bought a collection of Big Red soda bottles with the team on them. Jeremiah drank the soda.

All of it. His mother, Tina Dilley, laughs about it now.

Jeremiah started his own brand of basketball, playing with a tennis ball and a small hoop. A few years later, Jeremiah attended basketball camp in Louisville, where he met Pervis Ellison and worked on his power forward game.

When Jeremiah started chemotherapy, he met a 3-year-old girl in a Cardinals cheerleading dress with pompoms, who would run up and down the hall despite her cancer. Three days after they met, the girl died.

Her joy in the face of a fatal disease gave him hope and strength as he faced down the pain of his own condition.

“I never told mom that,” he said through tears, turning his head to his right to look at Tina.