Seema Kulkarni, APRN, grew up in a small village in India, then moved to Mumbai after she married. She says parents strive for the best for their children In India. 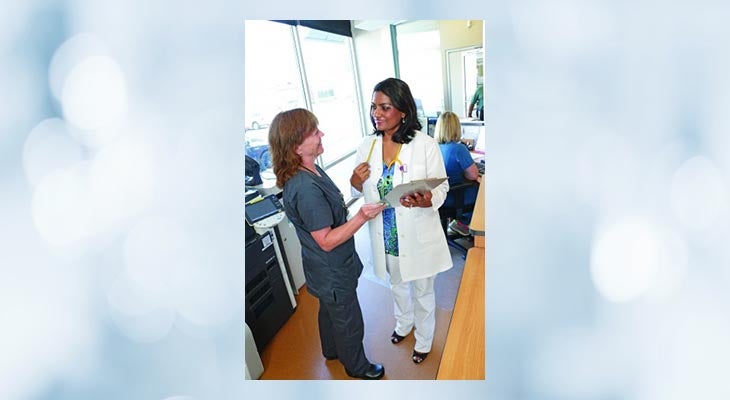 Seema Kulkarni, APRN, grew up in a small village in India, then moved to Mumbai after she married. She says parents strive for the best for their children In India.

“Education plays a lot of importance in the family,” Kulkarni said. “Everybody is concentrated on it. They save money to send you to college to get a good education, and they always hope you’ll become an engineer or doctor or lawyer.”

Kulkarni’s parents wanted her to become a physician, but she had no interest in the medical field then. Instead she became an accountant and worked for the Bombay Stock Exchange. In 1998 she moved to the United States with her husband, a software engineer at Fort Knox, and their young daughter. The birth of their second daughter 12 years ago led Kulkarni to change her career path toward health care.

“I was in Hardin Memorial Hospital in Elizabethtown, and it was just amazing how good the nursing and medical care was,” she said. “So I thought maybe I should go into nursing and help others like they helped me.”

While she was attending Elizabethtown Community & Technical College, a Norton Healthcare representative visited there and offered Kulkarni the opportunity to become a Norton Healthcare Scholar. The program offers educational assistance in exchange for a work commitment.

“Ever since, Norton Healthcare has played a big role in my education. It has been my second home and encouraged me to further myself,” she said.

Kulkarni went to work for Norton Hospital in 2006 and was named the hospital’s Nurse of the Year in 2012. In February 2014, she became a nurse practitioner, graduating from Indiana Wesleyan University with a master’s degree in family practice. She now works 24 hours a week at Norton Immediate Care Centers and 30 hours weekly at Hazelwood, an intermediate care facility for people with intellectual disabilities.

“My patients at Hazelwood can’t tell me what is wrong with them,” she said. “I’m learning so much because my diagnoses are based only on observation and tests.”

Kulkarni loves the work she does.

“I like everything about it — the patient care and the feeling of helping somebody,” she said. “At the end of the day, the thought of helping someone is what you’re going to sleep with and it gives you comfort.”

Kulkarni’s elder daughter is following her mother into the health care field. She graduated with a degree in biological anthropology from the University of Louisville and plans to start medical school in 2016. She has worked as a scribe at the Norton Hospital emergency department and earned a Norton Healthcare Dependent Child Scholarship. Kulkarni’s younger daughter is in seventh grade at Noe Middle School.

Seema Kulkarni, APRN, is serving as 2015 president of Louisville’s India Community Foundation (ICF). Each year ICF hosts an event for Diwali, the Hindu festival of lights. Russell F. Cox, president of Norton Healthcare, has been invited to be the chief guest at this year’s celebration, which will be held Nov. 7 at the Clifton Center. The event will feature live music, cultural dance, folk dance and Indian food. Kulkarni expressed thanks to Norton Healthcare for being part of her family and for its continued support to cultural advancement in the Indian community.