Closing racial health disparities will pay off with improved prevention

Closing racial health disparities will pay off with improved prevention 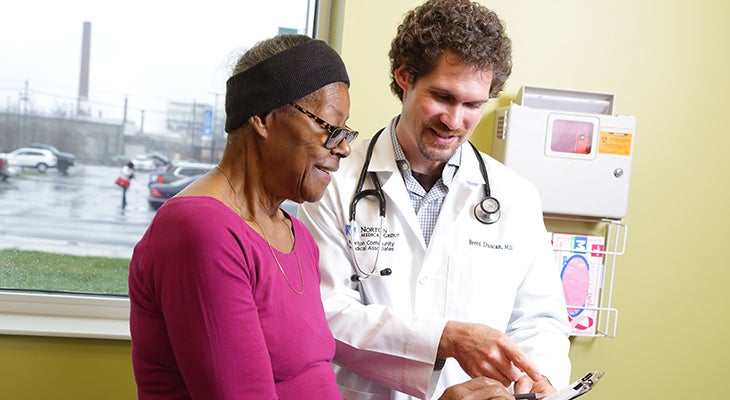 Increasing access to health care for African Americans will reduce racial health disparities, but real progress will come as more patients get preventive medicine like routine lab work and cancer screenings, according to a physician who practices in Louisville’s West End.

Gov. Andy Beshear recently announced the launch of an effort to provide health coverage to 100% of African Americans in Kentucky to address racial inequalities in health care.

“If we can insure everyone, then we are able to provide the health care that is needed to take care of the health issues that come up as well as do preventive medicine,” said Brent Duncan, M.D., an internal medicine physician with Norton Community Medical Associates – West Broadway.

“I believe access to health care plays a large role in that,” said Dr. Duncan, who has practiced in Louisville’s West End for nearly 10 years.

Even with increased access, health is not something that changes overnight.

“There is going to be quite a bit of catch-up, quite a bit of finding out things people have put off and treating things that are there or have been there for a while,” Dr. Duncan said.

Prevention will lead to real improvement in racial health disparities

Norton Healthcare Prevention & Wellness offers screenings and wellness resources through the Norton Healthcare Mobile Prevention Center at locations across Louisville and Southern Indiana. But an ongoing relationship with a health care provider and routine access to preventive medicine can have a much larger impact.

“One of the things we hope to do is impact some of the younger generation so that they can start living healthier and teach their kids to live healthier, and so then we start to see things improve,” Dr. Duncan said.

The last big increase to access to health care came with the launch of the Affordable Care Act (ACA), former President Barack Obama’s health care law, also known as “Obamacare,” which was signed in 2010. Some of the ACA’s changes opened up health care access for many beginning in 2014.

“What we saw for the first few months was a lot of people who had put off getting tests run, put off getting treatment, coming in because they can finally either afford it, or other providers were accepting them, whether it was a specialist or an imaging facility. And so we were able to kind of start getting on top of things,” Dr. Duncan said.

Even with the Affordable Care Act, though, not everyone had access to health care.

“We were still seeing people slip through the cracks,” Dr. Duncan said.

“What do we need to do next and how do we do that? What does that look like? We cannot just throw them in at the deep end. We need to help them navigate what the next step is,” Dr. Duncan said.