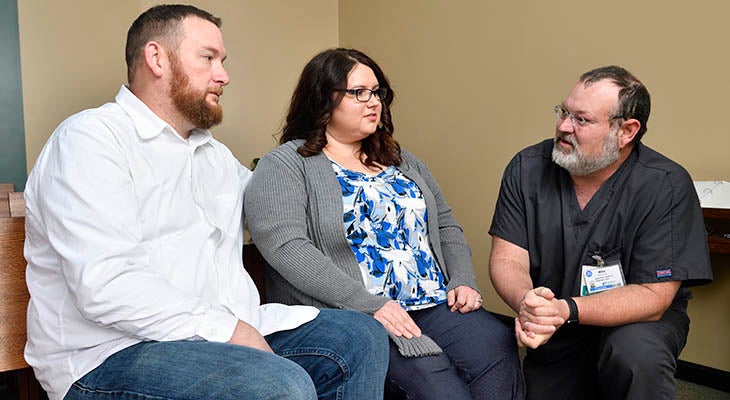 When treating others with compassion is a core part of your values, it hardly seems like something that warrants special thanks. At least that’s how a modest person like Mike Williams sees it.

Mike, supervisor, respiratory therapy, Norton Audubon Hospital, was honored — yet surprised — to learn that a patient’s family had submitted a “Say Thanks” message to recognize him. The Gordon family wanted him to know what his support meant to them during one of life’s hardest decisions.

As an advanced respiratory therapist, Mike can insert breathing tubes and arterial lines, so he often works with critically ill patients, like Sharon Gordon.

Sharon, age 71, had long struggled with heart disease. Her family said she had been in and out of the hospital many times last year when “a cascade of events” brought her back a final time.

On Nov. 7, 2017, Sharon went into cardiac arrest four times. Mike could see her fight was nearing its end, so he never left the family’s side as they made the difficult decision to discontinue further resuscitation attempts.

Sharon’s son and daughter-in-law, Chris and Jessica Gordon, are Norton Healthcare employees and had crossed paths with Mike before. The three even shared some in-law connections, so they knew him to be “a good guy,” yet that night they saw his true spirit shine through.

Jessica said the genuine compassion Mike showed them reflects what you’d hope to see in all health care interactions.

“He wasn’t just going through the motions and checking off boxes,” she said. “We will be forever grateful for the peace he gave us that night.”

Mike said he found his true calling 26 years ago at Morehead University, when he switched from studying pre-pharmacy to respiratory therapy. He heard he could get paid during respiratory therapy training, and as a newlywed, that made a difference for him.

He laughs about walking into class the first day and asking, “What’s a respiratory therapist?” It didn’t take long for him to know that he absolutely loved it.

Over the years, Mike has learned that people often mask their emotions in their daily lives but lower their guard when health issues arise.

“No one wears that mask when they’re seriously ill and need your help,” he said.

Mike has been with Norton Healthcare for six years. He also trains students as a preceptor for the respiratory therapy program at Spencerian College in Louisville.

He said he often tells his students, “The great secret to working in medicine is being able to bond with your patients.”