Riding to help other families avoid the heartache of losing someone to cancer | Norton Healthcare Louisville, Ky.

Willie Lawless got involved with Bike to Beat Cancer the way so many other riders do: Someone asked and it became personal. 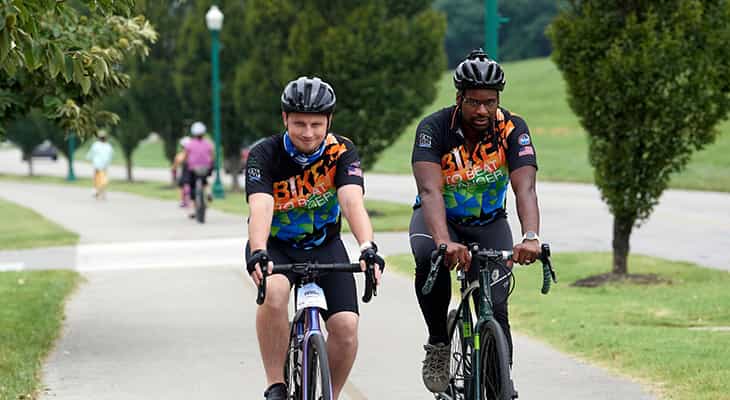 Willie Lawless got involved with Bike to Beat Cancer the way so many other riders do: Someone asked and it became personal. A friend from church, Phillip Cochran, had participated in several rides and encouraged Willie to start riding with him. During that same time, Willie’s niece, Shianne Lawless, was battling colon cancer at Norton Cancer Institute.

Shianne ultimately passed away at the age of 30, leaving behind a young son and a loving family. Willie was inspired to ride to keep Shianne’s memory alive and help prevent other families from going through such heartache.

In 2019, Willie registered to ride 35 miles in Bike to Beat Cancer. It was Willie’s first “legit” ride and was a battle he knew he had to take head on. To him, it felt it was a little like the decision every cancer patient has to make.

“Those diagnosed with cancer can either chose to lay down and let cancer win, or they can go in fighting that battle,” Willie said.

While preparing for the ride, Willie put his Bike to Beat Cancer “I Ride for … ” sign in his front yard with Shianne’s name on it. Neighbors would stop and ask him what the sign was about, and he was able to spread awareness about Bike to Beat Cancer, raise some donations and share Shianne’s story.

During his ride in 2019, Willie felt the energy and camaraderie of his fellow riders. Talking with the other riders, he learned that they had shared stories and also had loved ones they are riding to honor. When the pedaling got tough, Willie felt the riders pushing each other along. He also thought about Shianne.

“As a new bike rider, I wanted to believe I could do it, and I just kept pushing through,” Willie said. “Shianne fought cancer with everything she had, so this was the least I could do for her.”

Crossing the finish line was an emotional moment for Willie. He made the commitment to ride in Bike to Beat Cancer every year for Shianne and to raise “as much money as possible” for cancer patients.

Willie kept that commitment going in 2020 while riding the Bike to Beat Cancer route in Southern Indiana. He registered to ride the 65-mile ride originally, so he did the Southern Indiana route enough times to achieve his goal. Willie easily could have ridden the shorter route once, but “I didn’t want to cheat corners,” he said. “My goal remains the same. I am doing this for Shianne and every single cancer patient out there and giving it my all.”

Willie is grateful for the care Shianne received at the Norton Cancer Institute, where the team also supported her son and family.

“I’ll never forget Norton being there for her,” Willie said. “The medical side is great, but supporting people in their whole battle is just as important to me. I can’t thank Norton Cancer Institute enough.”