With a scope to see inside the joint through three small incisions, surgeons can repair tissue tears, smooth out imperfections and relieve impingements. 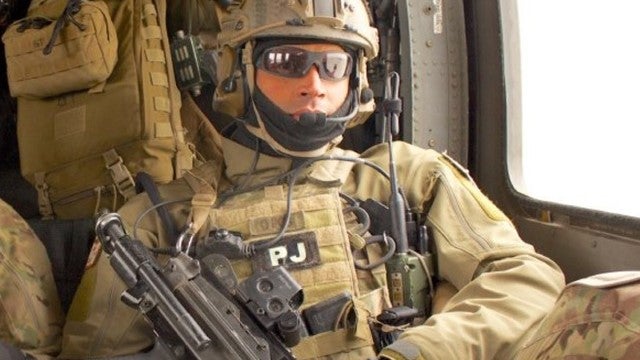 Imagine you’re in a war zone, your plane has crashed and you’re severely hurt. You’re all alone, can’t walk and if the enemy finds you, you’re dead. Then, a camouflaged angel descends from the sky, picks you up and carries you out of that indescribable torture back to safety.

Jeff is that guy.

At age 38, Jeff is a Pararescueman for the U.S. Air Force Special Operations Command. His job: parachute behind enemy lines to aid and retrieve injured pilots, soldiers and civilians, regardless of the danger. Sometimes he’s lucky enough to have a vehicle to transport the wounded. Other times, Jeff and his team have to carry them out.

“It’s extremely physically demanding,” said Jeff, whose last name can’t be revealed due to the sensitivity of his work. “We have to carry pilots out of deserts and mountains, sometimes surrounded by gunshots. The longest I’ve had to physically carry someone is six miles.”

To say becoming a Pararescueman is challenging is an understatement. A 14-year veteran, Jeff, along with his fellow applicants, endured weeks of extremely rigorous and emotionally demanding training. Most don’t make the cut. Jeff’s class started with 120 applicants. Two years later, he was one of only four to graduate.

Jeff made it through, but it came at a price. During the selection process, he developed a sharp pain in his hip but fought through it. In fact, he ignored it for five years as he executed more than 40 rescue missions all over the world. Last year, his body finally gave out.

“I was jumping out of an airplane in the Middle East and my back essentially stopped working,” he said. “I was the one who had to be rescued that day.”

Doctors quickly identified the problem. Jeff’s back gave out because of a hip injury — now diagnosed as a labral tear — he suffered years earlier. His body had been compensating for too long and couldn’t take it anymore.

A hip labral tear involves a ring of cartilage, called the labrum, that follows the outer rim of the hip joint socket. The labrum acts like a rubber seal, or gasket, which helps hold the ball at the top of your thighbone securely within your hip socket.

Usually, most people who suffer these injuries are faced with two options: a hip replacement or a regimen of therapy and injections. Neither of those options worked for Jeff. His body could no longer deal with the pain, and rehab wasn’t helping. A replacement would have medically disqualified him from being a Pararescueman, something he wasn’t ready to give up.

That’s when Jeff learned of a third — and rather new — option. It’s called hip preservation surgery. With a scope to see inside the joint through three small incisions, surgeons can repair tissue tears, smooth out imperfections and relieve impingements. The result: no hospital stay and it might delay — or prevent — the need for a complete hip replacement.

Jeff reached out to Samuel D. Carter, M.D., orthopedic surgeon with Norton Orthopaedic Specialists – Brownsboro, who is one of only a few surgeons statewide who performs hip preservation surgery on a regular basis.

“This type of surgery has been used on shoulders for 25 years, but it’s only recently that we could use it to repair hips,” Dr. Carter said. “I treat patients ranging from injured high school athletes to active adults with degenerative issues.”

Hip preservation can reduce the number of major surgeries a patient may face, an important benefit since artificial hips often must be replaced. It’s also much less invasive and greatly reduces risks.

“I was confident I could help Jeff get back to jumping out of airplanes and saving lives,” Dr. Carter said.

Jeff had hip preservation surgery in March 2015. He said his hip felt better immediately. After several months, he was walking normally again and resumed training.

While it isn’t a cure-all for all hip conditions, Dr. Carter said hip preservation surgery is paving the way for an exciting future.

“I expect the number of hip scope surgeries to increase tenfold over the next decade,” he said. “This could really open the doors for the hip patients who want another option.”

Jeff agreed: “I can’t believe I achieved such good results with such a noninvasive procedure. I have a new lease on that leg and I can’t wait to get back to doing what I love.”