With 100% blockage of a key artery, Jamie Lowry didn’t have long. With the STEMI network activated, the blockage was cleared in minutes. 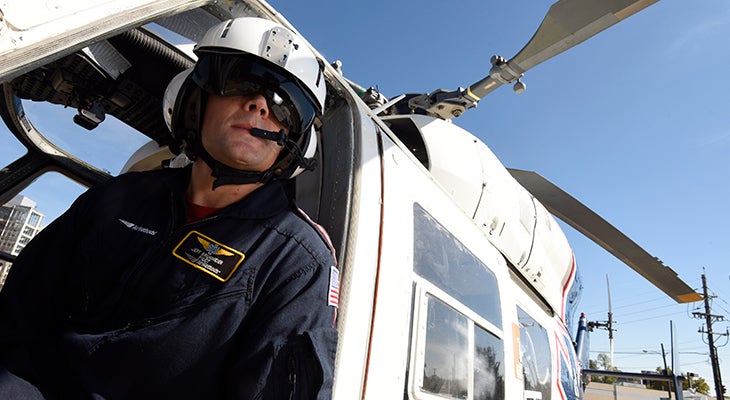 When Jamie Lowry arrived at work at Westwood Golf Course early one fall morning six years ago, he was 43 years old and looking forward to the birth of his second child. His wife, Jennifer, was 8 1/2 months pregnant. A heart attack was not on the radar.

Jamie was working on the Scottsburg, Indiana, course’s irrigation system when he began feeling what he thought was terrible heartburn and then a bad stomachache. He’d felt the same heartburn almost exactly a year earlier, and it had gone away.

This time, something didn’t feel right, and Jamie got in a golf cart and headed for the clubhouse. On the way, he tried to call his sister, Sharon Parker, who also worked at the course.

“I couldn’t see anything. Everything went white,” Jamie recalled recently.

Somehow, he made it to the clubhouse and told his sister to call 911.

“I just remember lying there in the pro shop,” Jamie said. “It felt as though my chest was on fire.”

Emergency medical technicians arrived and then an ambulance. Jamie went first by ambulance to nearby Scott Memorial Hospital — more than a half-hour’s drive north of Louisville —  and then by helicopter to Norton Hospital in downtown Louisville.

“It was the craziest thing. Everything was going fast,” Jamie said. “To me, it seemed like the helicopter went straight up and straight back down.”

At Norton Hospital, Jamie was rushed to the catheterization lab. There, Wayne M. Shugoll, M.D., cardiologist with Norton Heart & Vascular Institute, performed a procedure called an angioplasty. Jamie watched a monitor as Dr. Shugoll inserted a stent, opening what was a completely blocked artery leading from Jamie’s heart.

According to Jamie, as soon as Dr. Shugoll inserted the stent, he felt better.

According to Jamie, there is no history of heart issues in his family, and he was in a good health before the heart attack. He didn’t have any of the common risk factors for a STEMI heart attack: older age, heart failure, diabetes, smoking, kidney disease, a fast heart rate or low blood pressure. Later, he tested positive for Lyme disease, which he believes may have been a factor.

“I don’t know how I’m here today if these people aren’t where they’re supposed to be.

Especially with 100% blockage. The 911 responders. The communication with Norton [Hospital]. I’m lucky to be here,” said Jamie, who is now athletic director at Scottsburg High School.

Recovery from a STEMI heart attack requires rehabilitation, and Jamie worked his way back slowly at Clark Memorial Health’s cardiac rehab, under the guidance of nurses there. He now runs 10 to 18 miles a week and no longer worries about another heart attack every time he has an ache or pain.

Our specialists treat more people for heart and vascular care — about 250,000 every year — than any other provider in Louisville and Southern Indiana.

“I don’t know how long I went without thinking about it every day. The nurses told me it’s going to be six to eight months before you start feeling yourself again,” Jamie said. “Without cardiac rehab, I probably would have just gotten worse.”

From last wishes to greeting his new son

Lying in the clubhouse that September morning, Jamie wasn’t sure he was going to make it through the day. A lifelong resident of Scott County, Indiana, Jamie knows a lot of people, including the EMT who arrived on the scene before the ambulance.

Two weeks after the heart attack, Jamie was cleared to go back to work. He was mowing a golf green early that Sunday morning when his wife called. She was in labor. Jennifer gave birth to their son, Andrew, a few hours later with Jamie at her side.

According to Jamie, he is thankful for every day with his family and for the care he received when an unexpected heart attack put his life in the balance.

“It’s a miracle. That whole network being set up,” Jamie said. “Without that, there’s no way I’m here.”